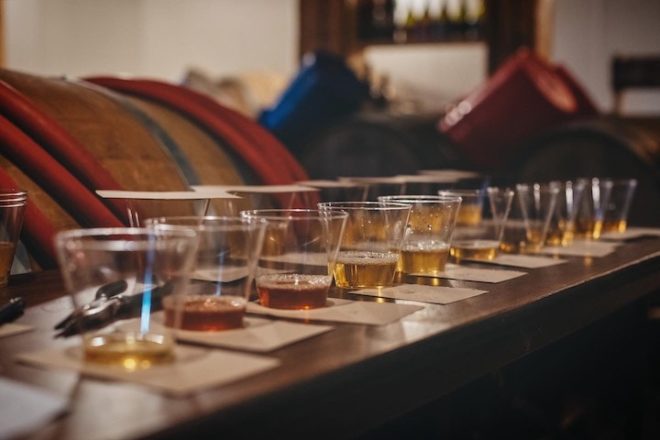 If you’ve taken a good look around at your local bottle shop – or read a few of my articles – you’ve no doubt been exposed to the latest craze: sour beers packed with fruit, vanilla, marshmallow and lots of other wacky ingredients. The base beers used for these zany drinks are a “sour beer,” but they’re the slightly more modern cousin of the original sour beer.

These fruited and funked-up sours are kettle sours – or quick sours – made with lactobacillus bacteria to achieve sour flavors. Most of the process is the same as for non-sour beer styles, but the lactobacillus makes sour flavors that are relatively easy to manage. The original sour, however – a process adopted from Belgian farmhouse brewers – goes through a much more complicated and time-consuming process.

From here on, this process and beer will be referred to as mixed fermentation. Instead of being moved to fermentation vessels within the brewery, these beers are instead moved to a separate location and fermented in barrels, foeders or other such vessels.

This is vital for a few reasons. First, instead of only lactobacillus, these beers are fermented with brewer’s yeast, wild yeast such as Brettanomyces, and/or bacteria. A Brettanomyce leak in the brewery can seriously mess up other beers.

Second, these bacteria love wood, and many of them can live in wood for ages, making wooden barrels ideal for reusing bacteria and getting distinctive, funky flavors.

Third, these beers take a long time to ferment – I’m talking years. Compared to the usual two-week turnaround for other beers, this would seriously slow down production.

Their barrel room is filled wall to wall with barrels and foeders, and occasionally they’re even stacked up to fit more in. When we arrived, Sampson first filled a few cups with samples from two different foeders. The beers were relatively mild, which, he explained, creates a good base for moving forward.

“What I like to do is add some barrels into the foeder to add complexity and acidity,” he said.

Sampson then wandered around the aisles of barrels, filling more cups and marking them with numbers. Once he’d collected a few of these cups, we started tasting. Each batch of beer fills about seven oak barrels, but just because these barrels went through the early brewing process together and were filled together, it definitely does not mean they taste the same. Each barrel had its own unique fermentation process going on, and so many barrels had to be tried. I remember one we loved – barrel 16 – because it was acidic and bright and fruity. That one went into the “keep” section.

Once we found a few that we liked, we tried some rough blending. Using a beaker, Sampson measured out a few different ratios so we could identify characteristics that we liked and strike a balance that made the blend complex, delicious and drinkable.

When we found our favorite blend – a mix of hoppy foeder saison, and 16-month-old and 27-month-old rye saisons – it was time to discuss other additions to complement the beer.

Sampson discussed the past uses of fruit and spice additions in their blends. Fruit is always popular for its acidity and sweetness, which match those of blends.

“I like to use local fruit whenever possible,” Sampson said before telling a story about cutting up 500 pounds of peaches by hand last fall to add to a blend to further ferment.

Although kettle sours are having their moment in the beer world and can create some wacky, unusual flavors, there’s something truly romantic about the process of mixed fermentation that will always have a spot in my heart.