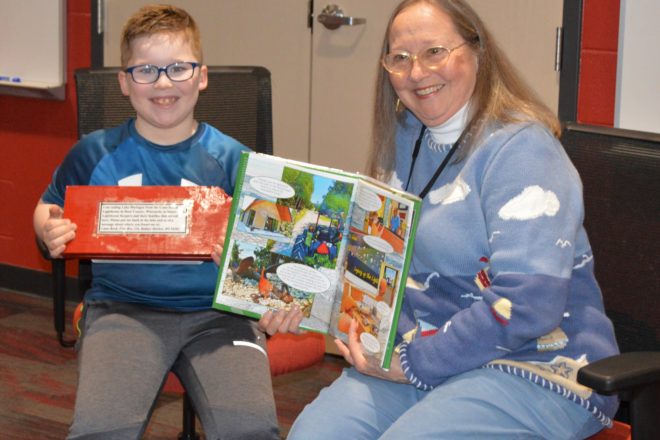 (From left) Camden and Sue Jarosh. Door County author Sue Jarosh read her new book, Camden and the Cana Island Cat, as a VIP reader during Sevastopol School’s Exercise Your Mind Literacy Night on April 7. Camden shared a prop featured in the book.

Sue Steckart Jarosh’s latest children’s book about Door County arrived from the printer this month and is full of adventure, excitement and well-researched history.

Camden and the Cana Island Cat, which is illustrated with Jarosh’s own photos, is her fifth book in a series of stories set in historical Door County lighthouses. Cana Island Lighthouse was built in 1869 when it was discovered that Baileys Harbor’s first light, the “birdcage,” was actually directing ships in the wrong direction and that the Baileys Harbor range lights that replaced it did not reach far enough out to sea. Still, even with the new Cana Island light 85 feet above sea level and visible for 18 nautical miles, there were many shipwrecks.

With five children’s books now published, it’s hard to imagine that Jarosh hasn’t been a lifelong author, but writing is her third career. She worked for five years as a full-time elementary school teacher and for 30 years as a substitute teacher, plus more than three decades as co-owner, with her husband, Joe, of Jacksonport Craft Cottage.

All that time, living most of her life on the peninsula where her family has had a presence for generations, Jarosh was soaking up history and thinking about preserving it for her grandchildren and others.

After retiring from the gift shop in 2015, she became a tour guide at the 154-year-old Eagle Bluff Lighthouse in Peninsula State Park. The pieces all fell into place, and Jarosh’s first historical fiction book for children, Door County’s Eagle Bluff Lighthouse Mouse, came off the press fewer than two years later. It’s featured on the Storybook Trail in Murphy Park near Egg Harbor.

In Jarosh’s latest book, a young boy named Camden hears stories from his grandparents about his great-great-grandpa, Jesse Brown, who was once the lighthouse keeper at Cana Island. Dropped off for a tour, Camden stops at the interpretive center to watch a video about Cana Island, look at all the exhibits and take in Legacy of the Light, a display of all the keepers who lived in the lighthouse with their families. Then he falls asleep while waiting to meet Hal, the current lighthouse keeper and groundskeeper.

In his dream, Camden meets a friendly yellow cat who not only has lived at the lighthouse for at least nine lives, but also can tell Camden all about the buildings on the island and, especially, the major shipwrecks and other disasters that had occurred nearby: the three-day Alpena Gale that destroyed many ships that sought refuge nearby; The Windsor, whose captain wrote a message seeking help on a board that eventually floated ashore; The E.P. Royce, which was beached when it came to salvage the wreckage of The Windsor; The Frank O’Connor, on which a fire broke out and the crew was saved by the lighthouse keeper and his assistant; and The MJ Bartelme, whose crew was rescued after it ran aground in dense fog.

The cat also tells Camden what life was like for the keepers’ families and that one of the long-ago keepers, Jesse Brown, had named him Buddy.

Finally, Keeper Hal wakes Camden and apologizes that cleaning up after the previous night’s storm – during which Buddy was the hero for alerting people to a ship in distress – had delayed their tour of the lighthouse. Afterward, Camden’s grandparents arrive across the causeway on the tractor/wagon with an exciting surprise for him.