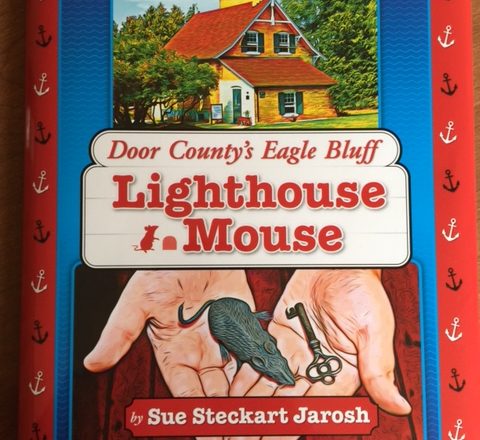 The first in a series of children’s books about Door County’s legendary lighthouses has been released. Door County’s Eagle Bluff Lighthouse Mouse, written and illustrated by Sue Steckart Jarosh, is now available in a number of Door County shops. It can also be found in locations in Green Bay, De Pere and in Dubuque, Iowa. The fictitious story takes place at the Eagle Bluff Lighthouse, located in Peninsula State Park.

From 1883 until 1918, William Duclon, his wife Julia and their seven sons were the lighthouse keepers. The story centers around the Duclon family and especially the adventures of their youngest son, Walter. Jarosh gathered information for her book from many sources: other authors, her tour guide training, her imagination and ideas from her grandchildren.

Jarosh grew up in De Pere and Door County, where she spent many summer days at the family cottage on Cave Point Road in Jacksonport. She and her husband Joe purchased the old Bagnall Home on Highway 57 in Jacksonport where they opened as Jacksonport Craft Cottage Gifts on Aug. 1, 1984. They operated the shop successfully for 31 years and sold it in the fall of 2015.

After retirement, Sue had more time for another interest, writing, and as a volunteer tour guide at Eagle Bluff Lighthouse Museum in Peninsula State Park.

Door County’s Eagle Bluff Lighthouse Mouse can be found at many area bookstores and is available to purchase at doorcountypolarbearpress.com.