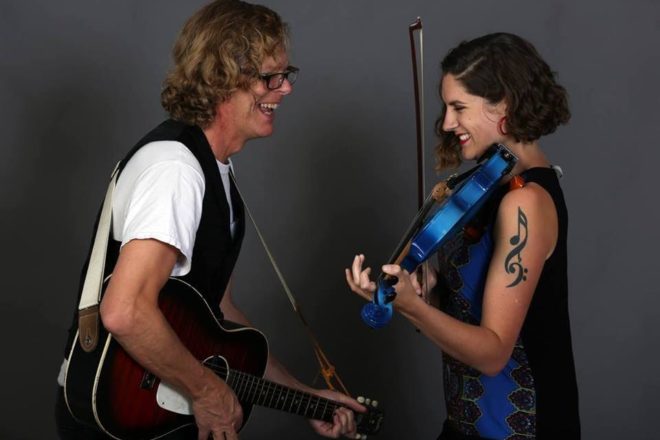 Gypsy folk duo Sugar Still is back in Sturgeon Bay on Aug. 26 after their post-Steel Bridge Songfest tour from Ottawa to Albuquerque. Sarah Blick and Charlie Cheney have been traversing the United States and up into Canada since February 2016, trading stories and songs for an eye-opening exploration of America.

They’ve come a long way since meeting in 2015 over a shot of whiskey in a Chicago bar. They’ve produced three full-length albums including their third studio album, Go, released March 1, 2017. The 10 lusty, polished tracks were written and recorded during their 2016 U.S. tour, each one as unique as the location where it was written. Since starting out in 2015, their co–writing has morphed into “gypsy folk,” a marriage of Cheney’s roots-blues storytelling and Blick’s classical upbringing, all with ripping violin, percussive guitar, whiskey-soaked harmonies, and a signature confident vulnerability.

They couldn’t stay away from the county for long. Sugar Still and Nashville songstress Claire Kelly will perform Aug. 26, 8 pm, at Door County Makers Space in Sturgeon Bay. Kelly will have her new EP Under Construction for sale; it’s full of honest lyrics, lively melodies, and at times, her powerhouse vocals. For more information visit sugarstill.com.