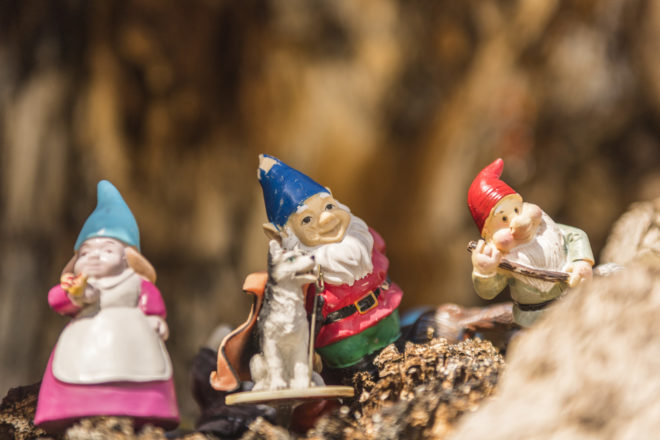 The editorial staff at “Door County Living” taking a closer look at the famous gnome tree in Gibraltar. Photo by Len Villano.

I remember the first episode of The Twilight Zone I ever saw. It was a cold, spring night, just a few months after I decided to silence my personal critics by adding a television to my minimal collection of apartment furniture.

It was the first time I had access to public television since the country’s digital television transition in 2009, revealing to those of us who grew up with seven channels a variety of previously unavailable sub-channels. I quickly became a fan of MeTV, billed as “The Definitive Destination for Classic TV.”

On that springtime, cold-as-winter Saturday, I flipped on the channel at the exact moment Rod Serling began his recitation against a backdrop of rapid, four-note electric guitar patterns, blaring brass, bongo interludes, spasmodic flutes, shattering windows, and the tick-tick-tick of expiring time…

That world famous Twilight Zone theme is a combination of two musical cues from Rumanian-born French composer Marius Constant:  the first, “Etrange #3” and the second, “Mileau #2.” Together, “strange environment.”

Boy, was it ever. All my life, I heard references to The Twilight Zone and as a (now reformed) “judge a book by its cover and a TV show by how much its title sounds like it could relate to Star Trek,” I never bothered trying to understand it.

That is, until I was thrown into a bizarre, stormy evening with Miss Elva Keene, an elderly woman whose eat-sleep-medicate existence is interrupted by two phone calls in the dead of night. The first, static. The second, a deep, mysterious, unrecognizable voice:  “Hello? Where are you? I want to talk to you.” I won’t ruin the episode for you, but if you’re interested, it’s season five, episode 139, “Night Call.”

I was simultaneously intrigued and terrified – the perfect storm of emotions that have driven my lifelong love for oddities. The Twilight Zone made it to the top of a list that included banana seat bikes, clowns and dolls from the turn of the 20th century,  Goosebumps stories, Jim Morrison’s poetry, and Tales from the Crypt.

It is with particular excitement, then, that I invite those embracing their will to be weird into our early summer issue of Door County Living. Curiosity may have killed the cat, but it drove a few of our editorial staff to explore the dilapidated, colorful, twisted and downright confusing places of the Door Peninsula to provide insight into the county’s visual oddities.

Ride that wave of curiosity into the world of “icon writing” with local artist Bob Appel or venture into the musical world of our “Paginini of the steelpan,” Liam Teague. Rarity abounds in floral form on a hike through The Ridges, and in the kitchen of writer Jim Lundstrom, whose experimental mixing, mashing and boiling led to the most delicious man buns you’ve ever seen.

Welcome to our wondrous land of imagination.

Next stop, the curious Door!