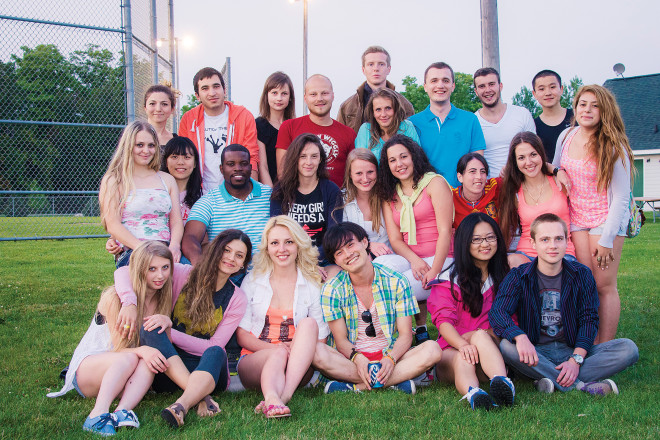 International student workers from the summer of 2013 at Piggly Wiggly. Photo by Len Villano.

Leading up to the summer of 2007, Nataliya Vasilyeva spent $1,000 and dozens of hours applying for the opportunity to clean hotel rooms for near minimum wage. In Ukraine, the cost to apply would equal one family’s annual salary, not including a plane ticket across the world and back.

“You gain work experience, language experience, cultural experience,” said Vasilyeva, justifying the challenges as so many other foreign students have done. “Then you get to travel. The intention was not to save money, but to get an experience, pay for it, and go back home.”

The J-1 Visa Program brings students from around the world to the United States to work and travel for a few months. Typically, Door County businesses pay a sponsor organization that handles most of the administration with the State Department. These organizations act as the bridge between a business and both the United States and international state departments.

The program supplies much of Door County’s workforce in the busy summer months, and perhaps more importantly, in the shoulder season when tourism is still high but all the help has gone back to school.

“Door County is targeting the ones that can stay through that hump of when our students went back to school and into the fall,” said Phil Berndt, membership director at the Door County Visitor Bureau (DCVB). “That was the most desirable part. Without increasing the population, we are able to bring in the help that we need and then they are gone.”

But Vasilyeva never left for good. After two summers under the J-1 program, she applied for a new visa, the F-1, which allowed her to enroll in school in the United States and stay through the entire year.

“I started at NWTC so I could get a hang of American education and English and just transition a little slower,” said Vasilyeva, who was also working overtime in several service industry jobs in northern Door County. “I always wanted to live in the United States. I always had this dream.”

Although she is now juggling job offers from internationally renowned accounting firms, at one point that was a very distant dream.

The visa program is expensive. Most families in Eastern Europe, where a majority of Door County’s visa students hail from today, cannot afford the initial state department fees to get their application off the ground. Once they do, there is the added cost for a plane ticket. Since the United States wants to see proof that a student plans on returning home, students typically buy a round-trip ticket instead of paying as they go and using their summer working funds to get them home. These down payments on the program raise the barrier to entry.

Once they get to the United States, the cost of food, housing and transportation also apply.

“You are getting paid the lowest wage. If you are coming and you are working 40 hours a week, you are not going to make enough money to even pay back the program and the plane ticket,” said Vasilyeva. While anyone else could simply work more to cover that gap in funds, it isn’t so easy for visa students.

“A lot of students cannot get a second job. They make it very complicated. You have to have your second employer file with the sponsor, go through all the checks then they have to give you permission to be working your second job. A lot of students were doing that because the first job will probably come close to pay for the program. Then the second job will help you have enough money to travel or even save to come back next year,” said Vasilyeva.

“A lot of my friends have been denied a second job because the employer is too small,” said Vasilyeva. “Then when it comes to the first employer, when they are hiring you and bringing you to this country, it’s not in their best interest for you to have a second job. They make your first job schedule so inflexible that you don’t have a choice but not to get a second job. That makes it very hard and that makes students reconsider coming to the United States.”

“I really felt like there seems to be so much redundancy out there of employers all having to run to Green Bay and they are all doing the same thing at similar times,” said Berndt. “None of them coordinated because those students might come from different sponsors.”

But how did the DCVB, an advertising agency tasked with the promotion of tourism, get involved with foreign kids and the state department?

The DCVB is supported by businesses that buy into a membership with the DCVB. Berndt’s office handles these memberships and looks to provide support to the businesses in any way they can. After a few years of seeing J-1 Visa students all around him, Berndt thought it was time to get involved.

“Our interest in the program has stemmed from a desire to support the business community and the community itself,” said Berndt. “After DCEDC (Door County Economic Development Corporation) was created, they really took on a lot of those traditional chamber type roles of bringing in business and supporting business.”

This separated the two primary drivers of Door County’s economy into two different offices. The DCVB is focused on supporting businesses in the tourism industry while the DCEDC focuses on manufacturing.

DCEDC Executive Director Bill Chaudoir admits, “We have always had a primary focus on manufacturing because of the significant jobs at stake.” The DCEDC is not involved in the J-1 Visa program outside of recognizing it is important to tourism, an industry they are not focused on.

And although the DCVB is primarily focused on attracting tourism through advertising, Berndt does not see the need for another organization to step in and prioritize the J-1 Visa program and help businesses sponsor students on their own instead of paying a company in Chicago to do it.

“I feel like I’ve got a healthy patient and it’s been working smoothly,” said Berndt. But he admits, “There are a lot of things that I can’t answer because I’ve never been in the program. I’ve started to learn who the experienced employers are and I tend to refer to them.”