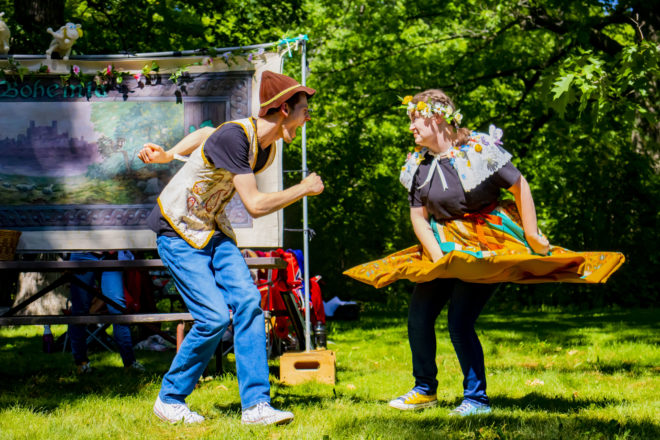 Shakespeare has a lot to offer both audiences and theater troupes alike. The stories are epic and compelling, the characters interesting, and the dense text full of beautiful prose that’s rife with possibilities for unique interpretations. Shakespeare’s plays are also free to use, which makes the barrier for entry very low, even for new theater companies.

Moreover, they’re endlessly adaptable, meaning that any of Shakespeare’s works can be tweaked, trimmed and customized to fit any audience and venue. Large theaters can mount lavish productions with dozens of actors and advanced technical design, while community theaters can put on smaller scale, but highly focused and honest performances of the same story with minimal technical elements. Door Shakespeare, for example, is currently running a one-actor production of Hamlet, exemplifying the malleable nature of Shakespeare’s work.

On July 18, the Summit Players Theatre will present The Winter’s Tale in its own special, approachable way at Peninsula State Park. The theater was founded in 2014 by Marquette University theater students who wanted to break down some of the barriers to entry on the audience side of Shakespeare.

First, they wanted to make each show as accessible as possible, which they’ve done by touring each year through Wisconsin’s many state parks.

“If we bring the show into your backyard, you need to travel much less,” said Executive Director A.J. Magoon.

Second, every Summit Players show is free. Theater audiences tend to come from privileged backgrounds, Magoon said, “but this is work we’re doing for everyone.”

Third, the group adapts each play to be more approachable. Although the Summit Players don’t change or modernize the text, script adapter and founding member Maureen Kilmurry does trim each production down to around 75 minutes, focusing on narrative throughlines and character development, rather than tangential moments and any element that isn’t relevant to modern audiences. The result is an easily digestible version of the play that still respects the original text.

Finally, preceding each production, a 45-minute educational workshop for children and families breaks down the story, characters and themes to give audiences a primer on what they’re about to see.

Each year Magoon asks himself, “Why this play, at this time, for this audience?” This year, he hopes that The Winter’s Tale’s themes of power and how we treat those in power will ring true for modern audiences.

Experience The Winter’s Tale on July 18 in Peninsula State Park. The workshop will begin at 1 pm; the play will follow at 2:30 pm. The show will not be at the amphitheater; instead, follow the signage in the park to the Fish Creek picnic area. Learn more at summitplayerstheatre.com.