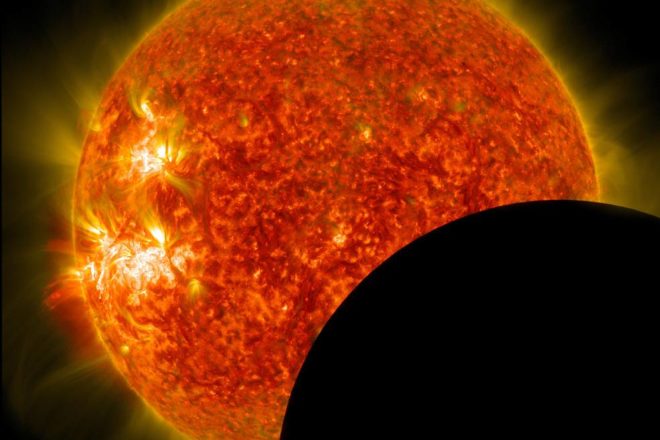 This image of the moon crossing in front of the sun was captured on Jan. 30, 2014, by NASA’s Solar Dynamics Observatory observing an eclipse from its vantage point in space. Photo by NASA.

Welcome to this latest issue of Door County Living, assembled to celebrate the season of plenty here on the peninsula.

At 11:24 pm on June 20, we here in the Central Time Zone, along with our friends in other times zones throughout the Northern Hemisphere, entered the summer solstice, the time of long days and short nights.

The days leading up to and away from summer solstice are the longest of the year, giving us a total of 15 hours and 36 minutes of sunlight at the apex of daylight.

We always look at sunrise and sunset as those fixed times for daylight, which on the first full day of summer was 5:03 am and 8:39 pm, respectively.

But it really isn’t that black and white. Day and night do not suddenly turn on or off with a switch.

I was reminded of this recently when photographer Len Villano and I set a time for an early morning assignment. We wanted to be ahead of dawn in order to be able to shoot a fire being lit in the still darkness before dawn.

We were up a good 90 minutes before the official appearance of the sun on the eastern horizon, but the night sky wasn’t very dark.

Having come out of a long winter with little spring, we had forgotten how summer works, that the season of long, dark nights had ended and that we were near the summer solstice, when dawn breaks at 2:32 am, even though we don’t actually see the sun for another 21/2 hours.

If you do the math, you find that leaves us with only 31/2 hours of real darkness on those longest days of summer, and that is a concept hard to reckon with for those of us swathed so long in darkness.

Solstice comes from the Latin word solstitium, or sol (sun) and stitium (to stop), and it is as if the sun has stopped in its trajectory to linger longer over us, to finally pay us some attention after months of neglect. And within a week of the solstice, the minutes of daylight begin to shave away.

She is our fickle mistress. Enjoy her while you can.

And don’t forget to tune in on August 21 when she toys with us in a different way, with a teasing display when she disappears briefly behind the moon in what is being called the Great American Total Solar Eclipse, because it will traverse the entire country. It’s the first solar-lunar event of its kind in 99 years. If you miss this one, the next North American-traversing solar eclipse is August 12, 2045.

Scientists say this total solar eclipse will be an unforgettable experience for the lucky people in the approximately 70-mile-wide swath of the country from Oregon to South Carolina in the “path of totality,” which will be cloaked in twilight for the duration of the eclipse, less than three minutes.

Wisconsin, like most of the nation, is not in that path, but we can expect to see at least two-thirds of the sun covered by the moon.

Of course, we want you to be able to continue reading, so never look directly at the sun. You can find NASA-approved solar viewing glasses, as well as directions for making eclipse viewers, online.

In honor of the Sol-worshipping ancient Druids who gathered at Stonehenge at the summer solstice, and for ourselves:  “Ta muid anseo leis na deithe a adhradh” (Let’s hope for a fruitful and bountiful summer).