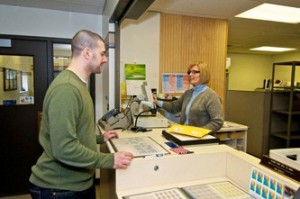 Mail used to be a beautiful thing. Letters from family and friends. Postcards from people on vacation. Acceptance letters from publishers. Paychecks. Paper, ink and postal stamps. Keepsakes. Pieces of a person’s life.

She’s not leaving because of the change in the kind of mail she handles and not because of the micro-management wrought by massive revenue losses in 20 of the last 22 quarterly reports from the United States Postal Service, but because life awaits.

“I have a huge list of things I couldn’t do when I was working,” she said. “I am going to help my husband. I am hoping we can do some traveling. If I need to get out and meet people, I will look for another job.”

Because, she said, the best part of her postal career was serving the people at the post office

“I will miss that immensely,” she said.

Family and friends have planned a retirement party for her on Sister Bay Beach from 1 to 4 pm Saturday, Aug. 2.

The location has significance.

“When my brother Nathan and I were younger, we would put on our swimsuits, pack picnic lunches and walk or ride bikes to Sister Bay Beach to meet our mom for lunch and go for a swim,” said Karen’s daughter, Tavia Lundquist. “At that time she worked a split shift so we had extra time to play in the sun.”

When she was hired by Postmaster Hank Eckert to work a few hours on Saturdays, she took home $9 a week and insurance premiums. Also when she started at the post office, Sister Bay serviced 330 post office boxes. Now there are 1,084 box numbers.

“I used to know everybody who had post office boxes, and now I can’t even pronounce their names,” Karen said. “I had no idea this would become a career. It was just a very part-time job in the beginning.”

But she was willing to take on more. Daughter Tavia recalls that just before her mother became postmaster, she did double duty as clerk at the post office and mail route delivery driver.

“She would do clerk work in the morning, go on the route and then finish the day with clerk work,” Tavia said. “I was surprised to hear that it wasn’t hard for her to learn how to drive on the right side of the car using her left foot on the pedals. I also remember her saying that while on the route, a lady would make lunch for her every day and give it to her when she delivered the mail.”

Karen points out that Sister Bay Post Office customers will see a couple of new faces because Pam Abshire is also leaving for another postal position in Green Bay.

“We don’t know who my replacement will be,” Karen said. “Debbie Hellen from Egg Harbor will be the officer in charge until they name a postmaster.”

Reflecting on her time with the post office, Karen said, “I’ve worked with a lot of different people, and that’s been good. I really have enjoyed my job, otherwise I would have retired when I had 30 years.”