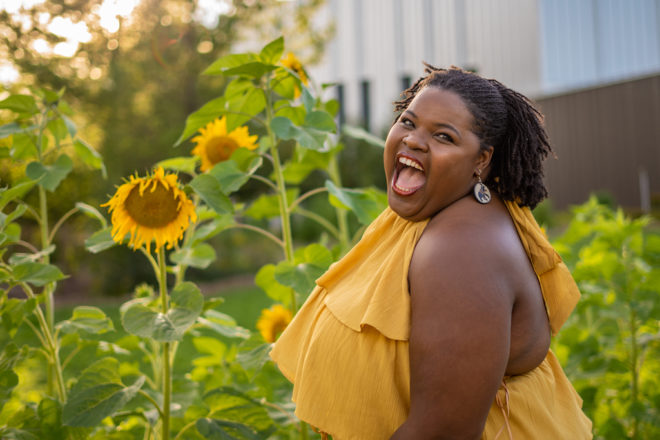 Lachrisa Grandberry is the composer, a performer and the playwright of Northern Sky Theater’s upcoming musical Sunflowered. Photo by Rachel Lukas.

Working on a play in any capacity means immersing yourself in the onstage world. If you compose the music, you’ll know every beat of every song by the time the rehearsals are done. If you act, you’ll develop a deep connection with the character you’re portraying. If you write, you’ll gain a birds-eye view of the story as a whole. If you do all three, the story might become a part of you, even offstage.

Just ask Lachrisa Grandberry, the composer, a performer and the playwright of Northern Sky Theater’s upcoming musical Sunflowered. It’s a celebration of female relationships that has made Grandberry rethink how she treats the women in her real life.

“The story holds sisterhood and friendship in this very sacred way, and because of that, I feel like I am now intentional and very conscious of how I engage not only with my friends, but anytime I’m in a room full of women,” Grandberry said.

She’s witnessed the play have this same effect on others, too. When the cast workshopped the musical last year, one woman in the audience talked to Grandberry after the show about a friend who was struggling. The woman’s week was a particularly busy one, so she wasn’t going to be able to visit her friend – but Sunflowered persuaded her to make the time to do so.

Once Sunflowered opens, Grandberry hopes it will have a similar effect on other audience members, inspiring people to “love out loud so you don’t miss your chance to.”

Strong Women Sow the Seeds for the Story

Sunflowered tells the story of six women as they bond during a camping trip in Door County. Each is “hiking through the journey of life in their own way and on their own trail,” Grandberry said. “The question is whether or not these trails will help these women find their way back to each other.”

Offstage, strong women have guided Grandberry along her own trail in life – from the woman who encouraged her to join Northern Sky Theater to the women she worked alongside during rehearsals.

Parts of these women, as well as Grandberry herself, are written into the cast’s characters, according to Grandberry.

“It’s been the one consistent pattern in my life,” she said. “There’s always been some woman who has lifted me and held me together and has helped me progress.”

At first, Grandberry was nervous about how the play would come together, but keeping its message in mind, she was intentional about keeping her nerves at bay and making rehearsals as peaceful as possible.

“You can’t have a crazy, stressed-out rehearsal room with a story that celebrates sisterhood and friendship,” Grandberry said.

And since rehearsals started, much of her anxiety has faded.

“The excitement of seeing the powerhouse of women in the room sort of take these characters into their hands, their bodies, their minds and their hearts and bring them to life has overshadowed any fears or nervousness I’ve had,” she said.