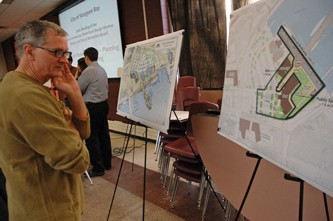 Dave Hayes, owner of the Reynolds House B&B in Sturgeon Bay, looks at plans for the public spaces of the Westside Waterfront Redevelopment project.

Dancing water fountains, splash pools in the shape of the Great Lakes, dry docking the John Purvestug on land, an ice skating rink and doing nothing at all were some of the options offered for the public space of the Westside Waterfront Development project at a meeting of a Sturgeon Bay “super committee” held at Sturgeon Bay High School March 24.

The super committee is comprised of the city’s Plan Commission, the Waterfront Redevelopment Authority and the Parks and Recreation Board. With the members of those groups and the public who came to hear and offer comment, there was close to 100 people in attendance.

Mayor Thad Birmingham said the purpose of the meeting was to gather more public comment on the planned public space “before turning the engineers loose.”

He also said this meeting was not meant to address the proposed hotel or any other part of the redevelopment project, and asked the public to “keep your focus on the public space.”

“Dream big,” he told the crowd before handing the microphone to Jolena Presti and Jeff Maloney, urban planners with Vandewalle and Associates, the design firm the city has been working with from the start of the project. Maloney referenced a similar meeting held at Sawyer Park the summer of 2013 in which many of these same things were discussed.

The ideas proposed at the 2013 meeting were reiterated at the latest meeting, with a festival area with a central stage and a pier going out into the bay.

“We really want to activate this space,” he said.

Maloney mentioned that Sturgeon Bay’s sister city in China, Jingdezhen, is installing a plaza dedicated to Door County that will feature an inset of the Great Lakes, and perhaps the city would want to reciprocate by celebrating the porcelain that puts Jingdezhen on the map.

He also said there is an $850,000 coastal management grant that can be used for the planning, engineering, design and construction for a first phase of the public space portion of the project.

Before opening the floor to comments from the committee and public, Presti said, “There’s not a wrong answer.”

But for some in attendance there apparently were wrong answers. While some speakers offered comments on adding attractions to the public space, just as money residents suggested the space be left alone or turned into a greenspace. Most important is keeping the water view, which, one man said, is “what keeps visitors coming back.”

Laurel Brooks of the city Plan Commission said the waterfront is “living history” that should be retained and said making the space “into a toy or game that is a reference to itself and its former days would be doing the city a disservice.” She suggested everyone let the space relax and “see how the space wants to be used.”

Several people said the planned concert stage should be rejected because the city has a new concert stage just a couple blocks away at Martin Park.

Several people voiced support for a Great Lakes water feature like the one at Frederick Meijer Gardens & Sculpture Park in Grand Rapids, Mich.