Wal-Mart is prepping plans for a new Supercenter to replace its existing store in Sturgeon Bay.

The retail giant appeared before the city Plan Commission in a concept meeting June 17 to discuss general plan parameters and get feedback from the commission. City administrator Steve McNeil said the meeting was a precursor to a formal application for a Planned Unit Development (PUD). 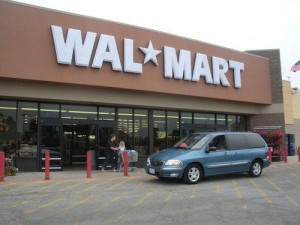 Wal-Mart’s existing store in Sturgeon Bay is less than half the size of the proposed Supercenter.

McNeil made it clear that Wal-Mart has not yet applied for a permit, but is expected to do so. The meeting was informational in nature.

“The concept meeting saves everybody time and money,” he said, allowing the prospective applicant to get feedback before paying for a final design, and giving the city an advance look at what’s coming. “We do expect an application to be filed in the foreseeable future, but not immediately.”

The concept unveiled by Wal-Mart included a 147,806 square foot store on 35.75 acres, 127 percent larger than the 65,000 square foot location on 9.2 acres on Egg Harbor Road today. Wal-Mart, the world’s largest retailer, has sought to build a supercenter in the city for nearly a decade, but has faced strong opposition. A 180,000 square foot plan was previously rejected.

Wal-Mart’s plan includes a pond to collect stormwater and an outlot (where its current parking lot sits) for future development. The company hopes to break ground on the project next spring.

Wal-Mart’s decision to apply for a PUD permit rather than a more common building permit surprised city officials, McNeil said.

“A PUD is something totally different than a straight building permit application,” McNeil explained. If Wal-Mart had gone the traditional route they would have had to have had the property rezoned. Then the plan would have fallen under conditional use permit guidelines, requiring approval from the Plan Commission and the City Council.

Under PUD rule, the Plan Commission still reviews the application, but only makes a non-binding recommendation to the council, which has the final say on the matter.

“One thing all councils are sensitive to, is that they appoint the committees, particularly Plan Commissions, to do a lot of hard work and give a lot of time,” he said. “There is some thought that you want to respect the work done by a committee.”

The Shipyard development at the foot of the new Maple to Oregon Street Bridge is a PUD incorporating condominiums, single-family, commercial, and marina uses. Target was also built with a PUD permit.

McNeil said the city can’t get involved in the politics surrounding Wal-Mart’s proposal or any other permit application.

“If you meet all the requirements of our code, we are obligated to give you a permit,” he said. “Our job isn’t to have an opinion on it. Our job inside City Hall is to deal with the business of it.”