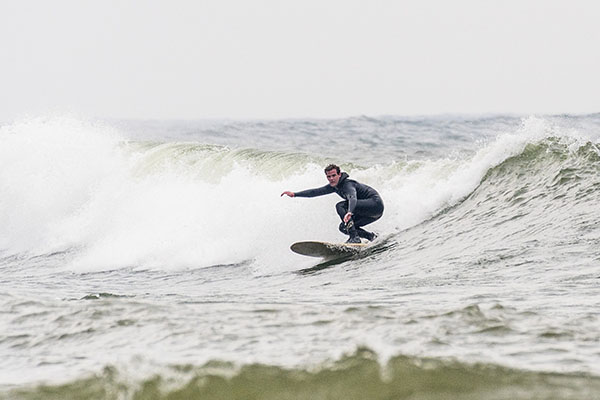 With all modesty, I’ve posted many surfing pictures of myself on social media during the last few years. The picture posted from a December surf session in Door County with a tagline simply reading “Lake Michigan, December 6th,” seemed to garner an unusually high number of comments: “You’re crazy,” “Brrr…,” and my favorite, “So cool, pun intended, but why?”

I learned the sport while living in Florida and I’ve been addicted ever since. Now calling Door County home, I find my old Florida surf routine is largely intact, with a few minor modifications: I no longer shuffle my feet to avoid stingrays, and no longer have moments of panic as a dolphin gets mistaken for a shark.

What does remain: the deep stretch session, the paddle-out with controlled breathing, and the expansive freedom of the water. There is also the mental checklist: surfboard, ankle leash, towel, water bottle, and wax. Do not forget the wax. Applying a nice fresh coat of wax to the surface of the board is critical to ensure that your feet don’t slip off the board. Fortunately for surfers of the north, there are cold water wetsuits, but getting into one is like getting consumed by a snake. It requires worming into a hole near the shoulders of the suit and just getting the suit on can be exhausting.

Discovering my first surf break in Door County was a special experience for me. I wasn’t positive that surfable waves existed, but I was elated to discover they do.

Ryan Heise discovered surfing when he lived in Florida, and wasn’t going to let a move far from the ocean stop him from finding waves.

Door County has a lengthy shoreline that faces south and east, and it’s perfect for capturing the swell that gets created on a strong south wind. So, how is it possible to surf on Lake Michigan and what makes a good wave anyways? Two things really: wind and topography of the lake or ocean floor. For the casual observer, one wave is pretty much as good as the next. Reading waves is a skill that is slowly learned, and there are key elements to look for. Surfers dream of days when the surface of the water is smooth. All waves are generated by the wind, tsunamis aside, but it’s the absence of wind that creates the best surfing water surface; a calm surface is referred to as “glass.”

The challenge of Lake Michigan waves is that the winds that generate the waves are the same winds that cause a rough choppy surface on the water. Compare this to a location like California where far-off distant storms can provide waves without any local winds. Therefore wind protection is a must in Door County. High bluffs, piers and islands, all can provide respite from the wind and strong currents.

The direction of the wave as it interacts with the bottom is equally important. The best waves peel. That means the face of the wave does not fold over onto itself in a crash of whitewater, but rather the face of the wave collapses from one end to another. It’s this crashing energy of the peeling wave that makes for the best ride, the longer the better. For a decent ride, a wave must have enough power to propel the board and surfer forward, and while it’s possible to ride a wave that is knee high, the optimum wave height is waist to head high.

The best surfing conditions in Door County occur during the late fall, with the arrival of strong cold fronts that cause the winds to blow out of the southeast in advance of the front. Winter produces the most impressive waves, but conditions can prove challenging. Spring and summer offer occasional waves, but they are typically smaller in size with little consistency.

Don’t waste any time looking for waves on the Green Bay side of the peninsula. Even on the off chance that the winds are strong enough to create a Green Bay wave, good luck with paddling against currents during a gale-force wind. It takes time to find the best location on any particular swell. We surfers move through a checklist to eliminate locations based on a number of variables, but there is only one way to know for sure: go and look.

I hesitate to write these words, and likely will catch some guff, but here they are — Door County has amazing surfing. (OK, forget that you read that please and don’t tell anyone else.) There is a certain amount of localism that exists in most surfing communities, how it manifests itself changes depending where you are in the world. In some locations it is ill-advised to paddle into a surf lineup without knowing a local (Hawaii). Not so in Door County, not yet. There are plenty of waves and surf breaks to share and you are likely to be greeted with a smile and inquiries to where you’ve traveled from. However, the Door surfers remain cautious to post pictures with geographical references in the background revealing the location of the best surf breaks.

Initially missing when I moved to Door County was my surfing crew of friends, but where there are waves there will be surfers. It takes a special kind of crazy to jump into water that, without the proper gear, will cause hypothermia in a matter of minutes. It’s this baseline craziness that creates immediate connections with surfers in the region.

We welcome anyone else wild enough to join our group and I hope to see you on the water during the next big storm. You’re likely to be greeted with a smile and a wave.