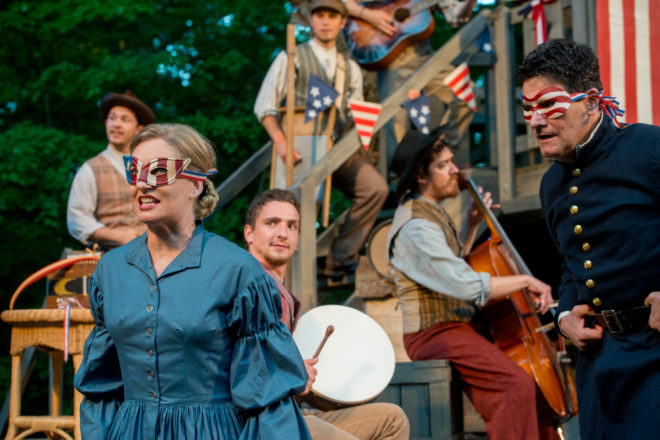 (Left to right) Deborah Staples as Beatrice and David Cecsarini as Benedick in Much Ado About Nothing. Company members in the background are Mikkel Knutson, Ryan Zierk, John Brotherhood and Ben Yela. Photos by Heidi Hodges.

Door Shakespeare began its 2018 season on June 30 with a production of Much Ado About Nothing, one of Shakespeare’s most delightful comedies. As is usual with Door Shakespeare, the play is performed in a clearing of the Björklunden woods, where the nearby waters of Lake Michigan help to cool the hot summer air. Audiences enter the clearing through a green and shadowy woodland path, a charming entryway to Shakespeare’s magical world of villainy and romance.

Michael Stebbins, the new artistic director of Door Shakespeare, was probably not in a romantic mood when he entered his new office for the first time. “The summer season was to get underway in less than six months,” he wrote in the June 29-July 6 edition of the Peninsula Pulse. “Plays had not been selected, actors and designers had not been engaged, and there was no support staff.” But in spite of a time limit that could easily have torn his nerves to shreds, Stebbins was able to select an excellent cast and prepare an engaging production.

Stebbins was wise to start his first season with Much Ado, because this show does exactly what a good comedy is supposed to do: it makes an audience leave the theater feeling happy. He took a chance by setting the play in Door County immediately after the Civil War, rather than in Sicily as Shakespeare intended. Habitual theater-goers will attest that “concept” productions can be cringeworthy, if not downright awful. In this case, however, the new setting worked, partly because of the universality of the subject matter:  throughout history, soldiers have returned from war to receive a hero’s welcome and to be reunited with their sweethearts and wives. The 19th-century setting also created an occasion for folk ballads, appealing country dances, and a bit of Door County patriotism. 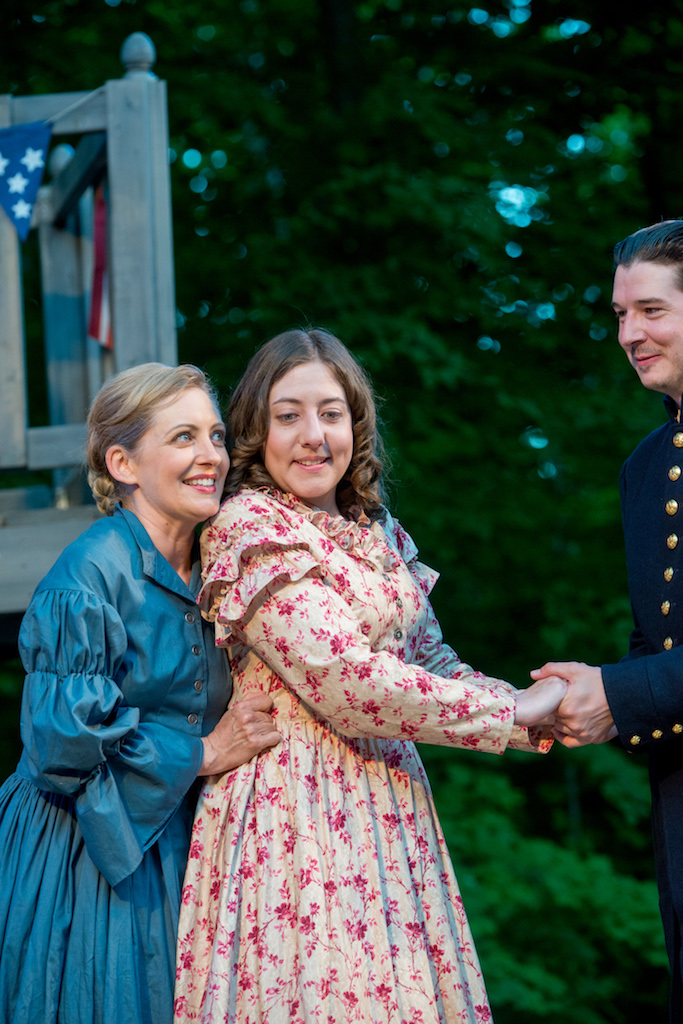 (Left to right) Deborah Staples as Beatrice, Elyse Edelman as Hero and Rob Doyle as Claudio.

Much Ado presents us with two pairs of lovers. Hero and Claudio are young and naïve; Benedick and Beatrice are older and more sophisticated – but perhaps, in their own way, more naïve than they imagine. Hero and Claudio can hardly wait to rush to the altar, but Benedick and Beatrice are too proud to admit that they are attracted.  They toss witty barbs at each other nonstop – in fact, they seem to take little interest in anything except each other. At one point Benedick lets it slip that he actually keeps a picture of Beatrice close at hand. Hero and her friends decide to take matters into their own hands, and they organize a successful scheme to trick Benedick and Beatrice into falling in love. But there is a jealous villain, Don John, who is plotting with his accomplices to ruin everything.

At the June 30 performance, David Cecsarini stole the show as Benedick. A versatile actor, Cecsarini played his role with dignity when the occasion demanded it but with antics verging on slapstick when Benedick falls headlong into the love trap. His real-life wife, Deborah Staples, was perfectly cast as Beatrice. She is an actress who can bring an audience to attention simply by walking onto a stage while holding a teacup. Rob Doyle was a standout in the difficult role of Claudio, who can easily come off as a malleable simpleton or a cad. Doyle played him sympathetically, however, as a character who deserves a happy ending.

Playgoers should keep an eye out for Drew Shirley, who plays the role of Constable Dogberry. This character does not appear on stage until the second act, but he has been noticeably influential in television and films. Dogberry is a dim-witted but dedicated officer, described by one critic as “like a lucky Basset hound with no sense of smell.” As he struts and frets his way through Much Ado, he mangles the English language almost beyond recognition but triumphs in the end, with the help of his equally stupid colleagues. We have seen him many times since.  He appeared as Sergeant Garcia in the old Disney series Zorro, he was Barney Fife in The Andy Griffith Show, he was Sergeant Schultz in Hogan’s Heroes, he won many fans as Lieutenant Columbo (although Columbo only pretended to be stupid), but his finest reincarnation was Inspector Clouseau of Pink Panther fame. Dogberry’s presence is always comforting, because in spite of his limitations, audiences know that nothing really bad ever happens on his watch.

Anyone who likes Much Ado might also enjoy Northern Sky’s fall production, Muskie Love, which is loosely based – very loosely – on Much Ado. Set on the shore of Green Bay. Muskie Love presents us with Ben and Bea, who run rival fishing tours. There is no Dogberry in this version; instead we meet “DNR Doug,” a comic villain who is “so stupid that he once raided the White Gull Inn because he’d heard they had egg poachers there.” The music of Muskie Love is good, especially the opening ensemble number in which the cast members sing about the joy of life on Green Bay.

Much Ado About Nothing runs through August 17. Performances are on Mondays, Wednesdays and Fridays at 7:30 pm. For tickets or more information visit doorshakespeare.com.