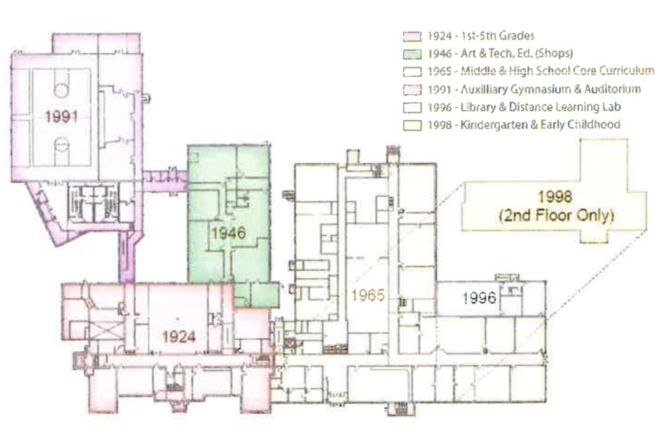 Residents within the Sevastopol School district should have received surveys regarding two options for school renovations that were developed by a 35-member committee that has been meeting since October.

“We’ve had a series of 13 meetings, looking at multiple options, and even within the options, looking at choices,” said Sevastopol School District Superintendent Kyle Luedtke. “CFAC (the Citizens Facilities Advisory Committee) has been mindful of expenses. We’re looking for the best solution for what we have here at Sevastopol. We identified the two biggest needs as improving the educational spaces and and school safety and security. We did not select one over the other because we feel both are equally important in today’s world.”

The committee worked its way down from options to just two that are considered in the survey.

Option 2 would demolish the 1924 and 1946 sections of the school, construct new elementary and middle schools while maintaining and renovating newer sections of the existing school, and address Americans with Disability Act issues. This option would be an estimated $45 million, representing an approximate $218 increase for each $100,000 of property value.

“Throughout the whole process, there was give and take,” Luedtke said. “Originally we talked about an auditorium and optional gym. After a couple meetings we realized that was too much and we took those out. The gym was between $1 million and $1.5 million and the auditorium was between $4 million and 4.5 million. That option was dropped early in the process. We’re trying to address the needs, not necessarily the wants.”

He said both options include keeping the 1991 gym to be used for music and theater programs, and the current music and choir rooms would be used for prop and costume storage and makeup rooms.

“We’re trying to enhance the arts, but it’s not an auditorium,” Luedtke said. “I’ve had some people question me why it isn’t included. The answer is it was 4 to 4.5 million. We’re asking for a lot of money here, so we’re trying to be respectful of that.”

Surveys are due back by June 25, and a meeting is scheduled to discuss the results at 6 pm July 10.

“When we get our results back in July, we’re optimistic one of the options that CFAC worked so hard at developing will be the answer,” Luedtke said. “But if neither receives enough support from the community then we’re going to continue working on what we need here, because this building has needs. It’s not about what we want. It needs improvement. Our facilities are lacking.”

In the meantime, for anyone in the district who has not received a survey, Luedtke said you just have to call the school to have one mailed to you or to receive a code to fill it in online.

And he adds that if individuals or small groups want to tour the school to see the problems, just contact him or Rock Lautenbach, buildings and grounds manager, to set up a tour.

“We are trying to reach out so people are well informed,” Luedtke said. “It’s a public entity and we want the public involved.”