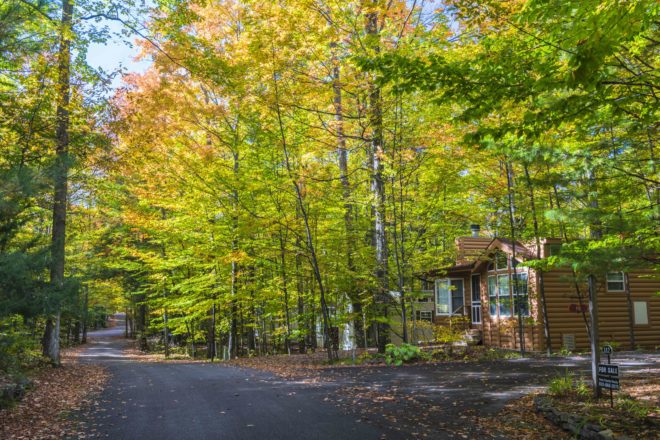 Units at Heritage Lake Resort outside Egg Harbor start at just 350 square feet. There are 230 homes at the 80-acre complex – none larger than 750 square feet – yet the heavily wooded grounds never feel urban. Photo by Len Villano.

Tiny homes are trendy, and the tiny-home lifestyle is the subject of several television shows, but could they also help solve the housing shortage on the peninsula?

Mariah Goode, Door County’s land use services director, said there are several roadblocks that make the 400-square-foot homes a long shot, but the size of the structures isn’t the main problem – it’s zoning laws. The minimum size for a single-family home on a foundation in Door County is 750 square feet.

A cluster of tiny homes, on the other hand, could be a different story. The caveat here is that they’d have to be built in a zone intended for multiple-occupancy developments (whether on wheels or not). These zones typically have sewer and water access, but Sturgeon Bay and Sister Bay are the only communities in Door County that have both.

Tiny homes could also be built as secondary housing units on properties that already have a single-family residence on them. In this instance, rentals would need to extend more than seven days.

Tiny homes follow the same concept as the “granny pod,” another type of small, secondary dwelling unit that’s made from old shipping containers. They have become popular in some areas for housing elderly people or couples, typically the landowner’s parents. The pod shares sewer, water and electric service with the main house.

Putting a home on wheels changes the game for tiny homes in Door County. According to Goode, there are no zoning regulations that would prohibit mobile tiny homes (fewer than 400 square feet, like any other camping unit) on privately owned campgrounds for seasonal housing.

In this case, tiny homes would be considered temporary dwelling units, allowing occupancy for a maximum of eight months of the year, similar to the Heritage Lake development outside the Village of Egg Harbor.

Owner Josh Kropuenske said he’s considered the concept of tiny homes but ultimately decided against it. Out of 115 campsites, 30 are already reserved for seasonal campers, some of which are rented by transient workers. Those campers are there from the time the grounds open to the time they close, and there’s a waiting list for the seasonal spots.

Plus, Kropuenske has rented to seasonal workers before when he worked in the hotel industry, and he found himself breaking up parties early in the morning. The campground setting seems to be an attractive idea because it’s affordable, but noise would be a problem in that setting, he said.

The seasonal sites he does rent are often to young people, but they are committed to the full-time camping lifestyle, he said. It works better in individual cases.

“That model fits a little bit better than it does devoting a section of the campground for businesses to put trailers in there,” Kropuenske said. “It’s a lot easier when it’s the person responsible who is actually the person staying there.”