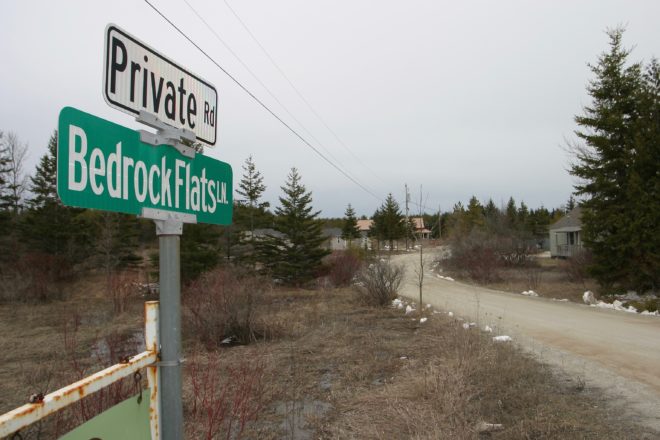 Anyone driving on County E regularly has probably wondered about the street sign that reads “Bedrock Flats.” Does Fred Flintsone live there?

“Bedrock Flats begins with me moving to Door County in the mid-1980s and everybody talking about what a housing shortage there was,” Navis said. “This was way before J-1 Visa [seasonal workers]. At that time, college kids came up by the bajillions. What people did at that time was park in a parking lot at the state park and live in their cars. They could take showers there.”

Navis trained in environmental design with the intention of going into architecture, but rather than housing, her interests were in “alternative energy design, super-insulated things, recycling.” All of that kicked in when she saw an ad for a Fish Creek resort that was selling cottages for $50 each.

“I thought we could make a little housing project,” she said. “It all happened within two weeks. We [she and business partner Marvin Lehman] found a piece of property on County E that was really inexpensive. There was nothing there, just a blank piece of land.

So we bought all the cottages.”

“We moved the cottages ourselves,” Navis said. “Unfortunately, zoning did not allow us to keep the cute, little self-contained cottages with a kitchen and bathroom. They needed to be a minimum of 750 square feet. So we connected them to each other.”

While moving the Fish Creek cottages to Bedrock Flats, they learned of another set of cottages for sale in Ephraim. It seemed as if the housing project was meant to be.

“They had I don’t know how many really beautiful, little cottages, all again with a full kitchen and bathroom,” Navis said. “We bought them all and moved all 25 little buildings. It was a two-year project moving all of those buildings.”

By combining the cottages, they ended up with two duplexes, one triplex and one single-family unit.

“It was only summer seasonal housing, but we housed a lot of people, a lot of college kids,” she said. “It was the only thing of its sort of that time.”

However, neighbors were not keen on the development.

“The neighbors were really unhappy,” Navis said. “They were claiming there would be prositution and drug dealing and parties. Even the partying was not an issue. We were in a lawsuit for five years. They would just keep filing new charges. If it got thrown out of Door County court, they filed it in Kewaunee County.”

“I worked from day one with Rick Brauer of the zoning administration,” Navis said. “Everything was totally above board.”

Eventually, they winterized the cottages.

“We had some people who lived there for years,” she said. “We sold the single-family house in the back. The people who bought it had horses. The last charge was when one of the horses escaped from the corral, and the charge was livestock roaming freely on the property. It was crazy. It was just crazy.”

Growing tired of the legal issues and of being a landlord for so many properties, Navis eventually sold Bedrock Flats, but she still believes it was a good idea.

“It was really an inexpensive way to recycle those cottages and keep them out of the landfill, and make livable housing for summer employees,” she said. “I thought it was a good idea.”

Two years ago, Navis had the idea of recycling another building – this time an Egg Harbor bed-and-breakfast that was located on the corner where the Kress Pavilion now sits. The village would have had to demolish the building at a reported cost of $20,000 had someone not bought it.

Navis bought the building for $1 and had it moved just a couple of blocks away on a half-acre of property behind Lull-Abi Inn.

“Now we’ve got two year-round apartments, one large apartment for J-1 Visa students, and two Airbnbs, which kind of floats the boat financially,” she said.

“I don’t think there’s one solution to our housing problem. It has to be lots of solutions,” she said. “We have all these falling-down barns. If the zoning ordinances and building codes were changed a bit, people could actually put housing in these buildings. Then it’s spread out. It’s not one big clump of housing. I think it really has to be a very broad solution.”