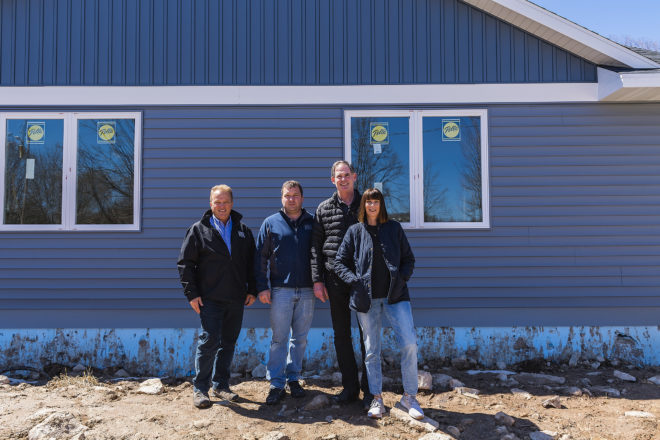 Alan Shefchik and Jason Boes from Portside Builders with Kaaren and Steve Northrop of Main Street Market in Egg Harbor.

Kaaren Northrop recalls a time in the not-too-distant past when summer employees would show up for work and ask, “Where am I living?”

Northrop, of Main Street Market in Egg Harbor, said the grocery store has been hiring seasonal employees through the J-1 Visa program for 20 years.

This winter, Portside Builders of Sturgeon Bay has been fighting the elements to finish a brand-new, 3,500-square-foot home in Egg Harbor that will house this year’s crop of the store’s summer employees, the first of whom are due to arrive May 20.

But that was after deciding to tear down the home that had stood in the same spot and had housed Main Street Market employees for about a dozen years.

“It was a summer home, and the woman who owned it, her family built it,” Northrop said. “She retired here, so they put an addition on the back end that was winterized. It was a bedroom, bathroom, living room and the remaining kitchen in the house that was heated. The rest of it wasn’t. She lived there and actually came to work for us.”

When the woman died, her family kept it, but when they decided to sell, they sold it to Northrop’s parents, Dave and Vonnie Callsen.

“It was really always a summer home, so it was kind of oddly laid out,” Northrop said.

With some adjustments, they turned the home into living quarters for their J-1 Visa employees.

“It was always full,” she said. “The first few years we had it, we probably had 10 or 12 kids, and I had people begging me to let them live there because they had nowhere to live.”

About five years ago, they opened the house to a single year-round occupant, a college student who was about the same age as the J-1 Visa students. “We had to kick him out the week before they tore the house down,” Northrop said.

But the old vacation home was slowly deteriorating.

“Every year we would do something to it,” she said. “Three years ago, we redid the whole entire kitchen – brand-new cabinets, counters. We redid the flooring and the laundry room. Last spring we carpeted the whole upstairs and did another bathroom.”

It seemed there was always something to repair in the old house, so last fall they invited Portside representatives to look at it and give an honest opinion.

“They said, ‘Tear it down,’” Northrop said. “We knew we had to have employee housing. For someone like us who needs that many people in the summertime, you have to have someplace for them to live. The old house was becoming a liability. We spent way too much money the last two years on it.”

So they decided to bite the bullet and have a new home built, and they came up with an efficient replacement home that by Northrop’s estimate can easily house 20 people.

“It turned out to be somewhat economical to build this,” she said. “It could be a template for others. If this works and it works well, maybe you can get some investors to build more of them.”

As you walk in the front door, there will be a living room and communal kitchen. To the right is a long hallway leading to eight bedrooms. A shared bathroom sits between every two bedrooms.

“I had this idea to lay it out like this,” Northrop said. “It’s actually a very efficient layout. Everything’s exactly the same. One color for everything: white. There’s a laundry room that’s five times better than my laundry room. All the same flooring throughout. The bid came in quite a bit lower than anticipated. It’s a 3,500-square-foot house, but [it costs] less per square foot than your average house because of efficiencies. This is not a normal house. Things you would put in a normal house wouldn’t work in here.”

It was also designed so they could shut half the home down in the winter, should they have a year-round resident again.

“I have at least four kids coming back this summer who were either here last year or two years ago,” Northrop said. “They thought the old house was nice, but I’ve been sending pictures, and they are excited.”

She said other Egg Harbor businesses will also benefit from the housing Main Street Market supplies because many of the employees work more than one job while here.

“Egg Harbor really is fortunate,” she said. “It’s really nice for our kids who live here and work for us because everything is close. They can ride bikes everywhere, and they have no problem getting second jobs.”

Just across the street from Main Street Market’s employee housing, Bob and Noreen Pollman have their own employee-housing project in the former Cape Cod Motel. The Pollmans were vacationing in Florida and unavailable for comment as this Sustainability issue was going to press.