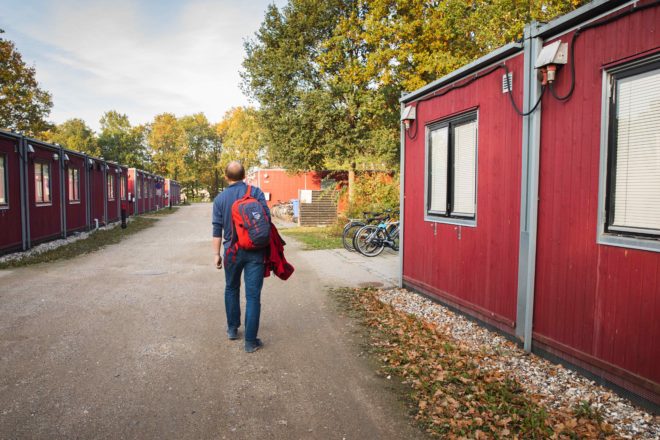 When Jacob Dannhausen-Brun studied abroad in the fall of 2018 in Lyngby, Denmark – outside Copenhagen – he lived in a shipping-container dorm complex. Photo by Christine Dannhausen-Brun.

When Leathem D. Smith of Sturgeon Bay invented the Safeway shipping container in 1945, he revolutionized the shipping industry. Seventy-four years later, could that same idea revolutionize housing in Door County?

In Europe, shipping containers have been a popular way to fill housing gaps for more than a decade, particularly in temporary situations. In London, Hope Gardens is a “meanwhile” complex: a housing structure built without permanency in mind. The midrise of shipping-container homes is meant to provide temporary housing for people who have hit a rough patch, putting land to use until the city assigns it a different use.

In Denmark, floating shipping-container complexes are now in use to house students, but there are landlocked versions as well.

Last fall my nephew (and former Peninsula Filmworks intern) Jacob Dannhausen-Brun spent a semester living in a shipping-container dorm while he studied at the Technical University of Denmark in Lyngby, a suburb of Copenhagen. The single-story complex featured five containers surrounding a central container hub of bathrooms, kitchen and dining facilities.

“The rooms were kind of mundane and boring and didn’t have any kind of living room, but only being there for a couple of months, they were an awesome place to meet people and experience other cultures,” he said. “Lots of conversations happened in the kitchen, and we often made meals together. Because it was a bunch of international students from throughout the world, we would often make food from our own country and share it with the others.”

They were also one of the cheapest options available to him.

On the flip side, the dorms were hard to keep clean with 10 students sharing the space “and kind of boring with the cookie-cutter atmosphere.”

Although shipping containers are often thought to be a green solution to housing issues, that’s sometimes not the case. Used containers are often damaged, threatening their structural integrity if stacked; and many are treated with chemicals to withstand the elements. But some container homes have been outfitted for less than $20,000, and when coupled with a common area for dining and bathing, they can be affordable and modular.