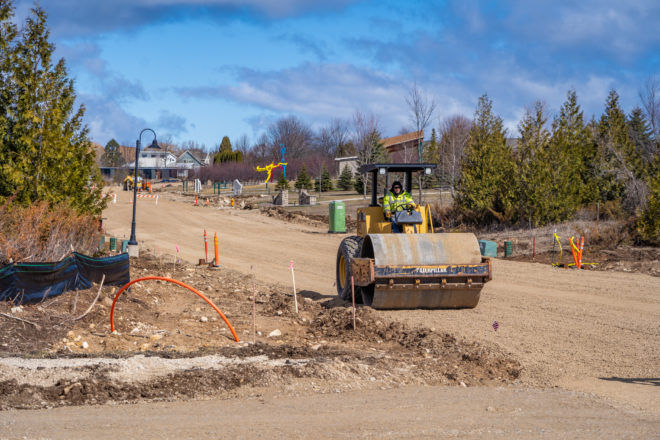 In the Village of Egg Harbor, construction of Church Street is underway. The street will get sidewalks, bike lanes, street lights and on-street parking spaces, making it one of the few examples of a Complete Street on the peninsula. Photo by Rachel Lukas.

County struggles to find space for all users

You wouldn’t know it if you never left Door County, but roads aren’t always designed specifically for vehicles. Particularly in tourist-dependent destinations, it has become the norm to make broad accommodations for mass transit, pedestrians and bicycles. But in northern Door County, you won’t find a single marked bike lane, and even the few bike-route signs you can find are likely to be rusted or scarcely visible.

That’s 13 years after the state of Wisconsin passed Complete Streets legislation in 2009 that mandated that the Wisconsin Department of Transportation (DOT) consider pedestrian sidewalks and/or marked or unmarked bike lanes. That prompted many municipalities across the state to implement similar policies for local streets and roads, though no Door County municipalities did. The state law was repealed in 2015 to “reduce the regulatory burden on the DOT.” In essence, the state said it cost too much to consider other users on its roads.

Door County adopted a comprehensive bike plan in 2014, the result of years of effort and advocacy from cyclists. The plan outlines short- and long-term goals for the county’s bicycle infrastructure, including off-road paths, on-street bike lanes and widened shoulders. Eight years after its adoption, little has been accomplished, even as three Northern Door communities have undergone major highway reconstructions, and as towns and the Door County Highway Department have repaved major stretches of roadway identified in that plan.

But today, there are small glimmers of hope for progress.

Local Advocacy for Cycling and Pedestrians

The Village of Egg Harbor was primed to become the first Door County community with bike lanes through its downtown when it unveiled its preliminary plan for its highway-reconstruction project in January 2020. That plan included marked bike lanes in each direction through the downtown.

In 2021, vehicle advocates scuttled that plan in favor of more parking, and bike lanes were cut from the plan. The village will instead route cyclists around the core to Church Street, currently being reconstructed and urbanized with sidewalks, parking, street lighting and bike lanes.

The village’s planning and commitment to Complete Streets under the leadership of then-Administrator Ryan Heise yielded big dividends. It won a $1 million grant from the Wisconsin Department of Transportation’s multimodal local supplement program to support pedestrian and bicycle enhancements on Church Street. That work is slated for completion this June.

The village also won $1.38 million in funding through a Transportation Alternatives Program grant to extend sidewalks and bike lanes on the north and sound ends of the village. That project, expected to be completed in 2023, will connect downtown sidewalks to a path on South Trail Road at the south entrance to the village. It will also provide a pedestrian connection among homes, condos and 168 hotel rooms on the north end to the core area.

In Sister Bay, village trustee Nate Bell has made it a priority to put cycling and pedestrian infrastructure at the forefront as the village grows and vehicle pressure on its downtown stresses capacity.

He is looking for people to join a committee to update the village’s Comprehensive Outdoor Recreation Plan, which will include the evaluation of future pedestrian and cycling infrastructure. Bell stressed that the plan is as much about transportation as recreation.

For the past two years, Bell has cycled as his primary mode of transportation during his daily commute from Sister Bay to Baileys Harbor, which has opened his eyes to the lack of safe routes for nonmotorized transportation in northern Door County.

Bell pushed unsuccessfully to incorporate full bike lanes into the reconstruction of Woodcrest Road this year. The village shares responsibility for the road with the Town of Liberty Grove, and though the road is on the county’s official bike route, the town and village did not incorporate cycling use into plans for the road early on.

The road has become a prominent bypass for trucks making deliveries to downtown businesses and residents seeking to avoid traffic. It will instead be widened from 20 feet to 24 feet.

County roadways are an even bigger challenge, according to Thad Ash, the county’s highway commissioner. He said the county takes the bicycle plan into account whenever it performs work on a roadway identified in that plan.

“We’re trying to widen all of our roadways,” he said. “Wherever the plans for expansion are, we’re trying to get them incorporated into the plan when we do our roads.”

But just as in Sister Bay, that widening goes only so far. The plan laid out a vision for an off-road, paved path along County A in the center of the peninsula, but that was deemed too costly and was never seriously considered. Instead, the road was widened slightly when it was repaved, but not nearly enough to make it comfortable for cyclists, and the county rebuffed attempts to have “Bikes May Use Full Lane” signage added to the road, even though it was marked as part of the county’s official bike route and had no shoulders.

The lack of progress on instituting the plan isn’t just because it lacks a champion at the county or municipal level, though that plays a role. It also comes down to money.

Ash said it can cost more than $150,000 per mile to resurface a road today. Many town and county roads have traditionally been 20 feet wide, and the county now aims to widen those to at least 22 feet, both for bikes and for larger vehicles and farm implements. Widening a road also means widening ditches and building up the base underneath the surface, adding tens of thousands of dollars to the project.

“For a bike lane, you need a five-foot paved area,” Ash said. “A normal road has two-foot shoulders, so to get there, you have six to eight feet of base to build up. It comes down to filling in the ditch.”

Ash said that when the county resurfaces County C from North Duluth Avenue to County PD, the plan is to add bike lanes to connect Sturgeon Bay to the airport. Eventually he hopes to extend those to Potawatomi State Park so people can ride on marked paths from the city to the state park.