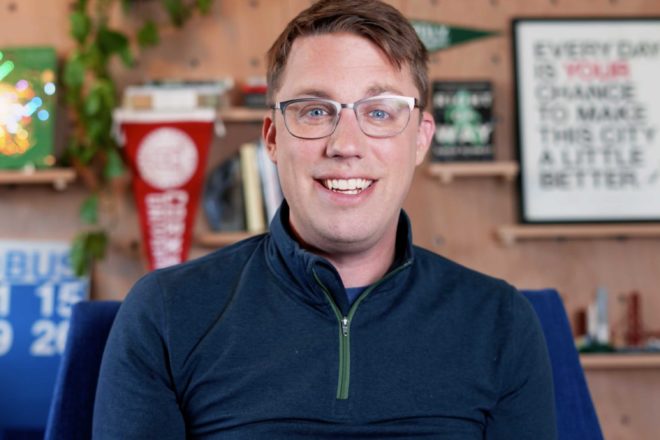 For five years, Cal Poly professor Dave Amos has been making complex planning and zoning topics interesting – even fun – through his YouTube channel, CityBeautiful. The Sturgeon Bay native and Sturgeon Bay High School graduate of the Class of 2001 has earned a large following for his expertise on creating better cities for all residents, particularly when it comes to bikes and pedestrians.

For 75 years, American transportation policy has focused on making drivers more comfortable to move faster. That might be smart for a freeway, but it makes for unsafe, disconnected neighborhoods, Amos said.

“We’re designing streets according to highway principles,” he said. “We need to ask who are we designing the streets for and what are the actual risks. The fire marshal usually wins the day. They drive big trucks; they feel safer going at fast speeds on wider roads. There are studies showing you can have narrow streets, windier streets, and still get trucks there in time.”

Narrower streets with trees, parked cars and curves make drivers feel less comfortable and cause them to drive more slowly.

“Speed limits really do nothing to control how fast people drive on a street,” Amos said. “People sort of have this innate sense of how fast they can go on a road based on how it’s designed.

“One important thing we need to do to make roads safer is to make drivers less comfortable because when drivers are more comfortable, they get in more accidents. Having a clear zone where you feel you’re not going to hit a tree makes it feel less dangerous. Going at fast speeds makes it more dangerous for a person on a bike or a pedestrian. If you hit another car or a pole, you have airbags and steel protecting you. Those folks on foot or on a bike do not. The most vulnerable people are the people on a bike or a pedestrian.”

“Everywhere can have bike culture, but it does take a sustained effort,” Amos said. “I’m impressed by a city like Minneapolis. In the same climate as Wisconsin, it has an incredible, year-round bike culture. It has dedicated bike infrastructure, especially protected bike infrastructure. That leads to more people biking, especially kids and women. You also have safety in numbers.”

The Importance of Trees

“The thing you can do to most improve a street is add trees,” Amos said. “Trees provide shade to reduce the urban heat island effect and shade to walk around. Trees clean the air at the micro level. They effectively narrow the street. There’s no better bang for your buck in street design than simply adding a canopy of street trees, but trees are always an afterthought to concrete and asphalt. Green infrastructure is just as important as the gray infrastructure.”

Amos points to many cities that take trees so seriously that if they are going to remove a tree, they must post that plan in advance so residents have a chance to respond.

Walkability Is More Than Just Sidewalks

Amos said wider sidewalks are just one component of a walkable community. In his mind, a good sidewalk is one where two people can walk side by side and have a conversation. Even better is one where two groups can do the same going in opposite directions. But a wide sidewalk without consideration for the aesthetics around it won’t get used.

“Do you feel like you’re going to get hit by a car?” Amos asked. “How attractive is the walk? Walking a mile down a frontage-road street is going to feel like a long walk, but a mile down a charming downtown street like 3rd Avenue in Sturgeon Bay is going to be enjoyable.”

Ideally, a sidewalk or path has some sort of barrier or greenery to separate it from the roadway.

“And trees are always there as a component of a good street,” he said.

Many times maintenance concerns lead to the elimination of trees, greenery or benches that make for a great, walkable sidewalk.

“The maintenance folks should not be the ones making the policy,” Amos said. “They should be consulted, but ease of maintenance should not have the final say in your street design.”

The Role of Housing

Housing is rarely a part of transportation conversations, and to our detriment, Amos said.

“Housing could be pitched as a traffic problem in Door County,” he said. “A lot of people want to work farther up the county. Having them drive up there from Sturgeon Bay or Southern Door County is not good for traffic. When you’re stuck in traffic, you also are traffic. You want people to live close to where they work. Transportation is land use, and land use is transportation.”

More dense housing near downtowns can take cars off the road if quality pedestrian connections are included. During the past decade, Sister Bay has added hundreds of housing units on the edges of the village core where workers live, but none of those developments include pedestrian or bike connections to downtown. The same goes for exurban housing built south of Sturgeon Bay. That means scores of workers are driving less than half a mile to work, adding to traffic and parking congestion.

“Generally speaking, in residential zoning, you’re allowed to build only a single-family home in that district,” Amos said. “That’s extremely out of step with the way people are living now.

“The biggest change I’m seeing countywide is more development along the corridors of Highway 42. That makes me nervous. The villages surrounded by green in farms or parks – that’s the value proposition in Door County. That’s where I get worried about losing the Door Countyness of it all. Rural residential growth, exurban development – piece by piece, that takes away from our agricultural heritage and creates this new rural sprawl.”