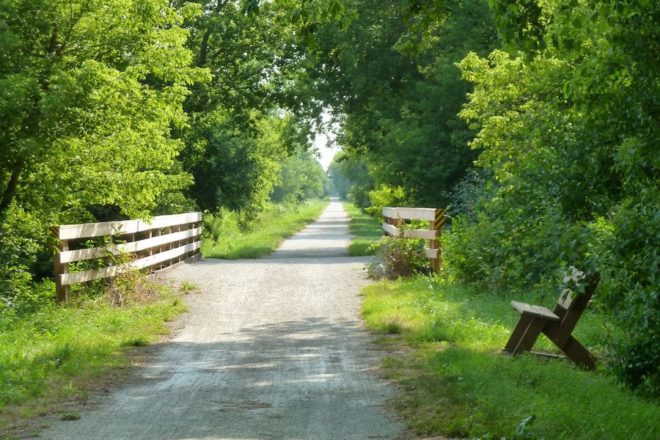 The White River State Trail is an example of how some communities and organizations are working together to connect rural areas to their more urbanized neighbors. A rail-trail with its western terminus located in Elkhorn, Wisconsin, the White River State Trail extends eastward to Kansasville, Wisconsin. Most recently, an additional 11 miles was added, which will eventually extend the trail as far east as Sturtevant, Wisconsin. Photo courtesy of the Wisconsin DNR.

Building stronger community connections one step at a time

There are more than 40,000 miles of multi-use trails in the United States.

That number falls short of connecting every, or even most, neighborhoods within our country, but it’s a solid start – and an important one.

That figure comes from the Rails-to-Trails Conservancy, a Washington, D.C.-based advocacy group that works to convert former railroad tracks to walking and biking trails. It estimates there’s the potential for economic benefits in the billions, amping up the ability of trails and other active-transportation infrastructure to play an important role in creating healthy communities and local economies.

This is especially true in more rural communities. A recent survey from the U.S. Department of Transportation revealed that rural residents strongly desire access to pedestrian infrastructure. More detailed data shows that “7.2% of trips in towns with populations between 2,500 and 10,000 are made on foot.”

Those populations are equivalent to the size of Door County communities such as Sevastopol and Sturgeon Bay. And yet, depending on where you are in Door County, the infrastructure to travel by foot – or use anything other than a motor vehicle – may or may not exist.

Kirsten Reeths, chair of the Sturgeon Bay Bicycle and Pedestrian Advisory Board and an alder on the Sturgeon Bay Common Council, said she sees a continued need for safe, accessible trails in her community.

“Any place, from sidewalks to trails, that would link up one side of the bay to the other is a plus so that everybody has means for public transportation,” she said.

Despite being home to segments of the Ahnapee Trail, Ice Age Trail and numerous designated bike/pedestrian routes, “there has been a lack of routes that people can use within the city to get to Point A from Point B,” Reeths said, “whether that’s to work or the hospital or the bank.”

There is also the need for additional safe crossing areas that move pedestrians and cyclists off busy roads, specifically off the state and county highways.

“Especially from the highway into the industrial park for those who are walking or riding their bike,” Reeths added.

That could happen in the relatively near future as the city updates its master bike plan in the coming months.

“We’re pretty well connected as a community as far as trails,” said Chris Robinson-Sullivan, city planner and zoning administrator, and vice chair of the Sturgeon Bay Bicycle and Pedestrian Advisory Board.

But that doesn’t mean there isn’t room for improvement.

“Right now, as far as what we as a city have been working on, [that] includes continuing to upgrade and extend these connections even more,” he said.

One example Robinson-Sullivan offered was creating an access route on the north end of the city so trail users don’t have to cross the highway to access the current trail.

“More or less, [improved trail access] provides alternatives to get you places,” he said.

Options – and easy access to those options – can be especially important for people who don’t have a vehicle, including the elderly, the visually impaired, people with mobility issues and others.

Past, Present and Future Trail Plans in Gibraltar

But Sturgeon Bay is just one community within the county, and its most urban. What effect does active infrastructure – or the lack of it – have on less urban communities?

Once upon a time, Door County discussed plans to connect the entire county through a network of trails, not unlike the snowmobile trails that traverse the peninsula. Steve Sohns, Gibraltar town chair and a former county board supervisor, recalled the effort.
“There was the intent to have a trail down the center of the county, and then you’d have these spurs that would go off into the communities,” he said.

The plan never materialized for a variety of reasons, and a revised plan today would be difficult to resurrect if for no other reason than the amount of change that has taken place in the county since then.
“So much of the land has been bought up,” Sohns said.

Whether such a trail could instead follow a model similar to that of the snowmobile trails, Sohns said it would be difficult to do.

“First, a lot of the snowmobile trails don’t allow for year-round travel because they’re not accessible in the summer,” he said, explaining that some segments of the snowmobile trails run along wetland areas, as well as through private property that the snowmobile clubs have special permission to access.
“All it takes is one landowner to say they don’t want us there, and it can change the whole trail,” Sohns said.
Without the county owning easements along the entire route, a countywide multi-use trail could potentially be subject to a similar fate.

Instead, creating pedestrian-centric infrastructure has been left up to the individual towns and villages. It’s on them, at least for now, to create their own trail plans that allow for connections with neighboring communities.
Gibraltar is pursuing grant opportunities to fund a multimodal trail that could potentially extend from the entrance of Northhaven condominiums along Highway 42 to the north, all the way south to Fish Creek Park. The proposed trail would travel south from Northhaven along the shoulder of Highway 42, where it would meet up with the sidewalk and continue into the village core. From there, the trail would continue into Fish Creek Park to the south. To the north, across Highway 42, a spur would follow the current snowmobile trail into Peninsula State Park.
During the summer months especially, that main corridor of the village becomes congested with pedestrians, cyclists and vehicles all competing for space along Highway 42, the only road that passes through the village core.
Sohns said the public parking lot behind the community center would also offer plenty of space for trail users to park their vehicles and easily access the trail.

“Just having access from our parking lot [behind the Town of Gibraltar Community Center] to Peninsula State Park and Fish Creek Park, that’s huge,” he said.

A “pipe dream” exists to eventually extend the trail even farther north, connecting it to Ephraim via a trail that would follow the northern shoulder of Highway 42. But for right now, the focus is on securing the funding to help make this first part of the trail a reality.

Gibraltar isn’t the only local community looking to improve the way people get around. In the Village of Egg Harbor, the 2020-40 Comprehensive Plan identifies that although, historically, the village has been very car-centric, an alternative infrastructure that supports both walking and biking is not only needed, but wanted.
Village Administrator Megan Sawyer said the village has worked to fulfill some of that need by extending the sidewalks in the downtown corridor. It has also added multiple pedestrian crossings to ensure safe access to both sides. But simply adding more sidewalks doesn’t solve the big-picture issues. The next step in the process will be to expand that infrastructure with an urban trail system that includes multi-use trails.

One example: a proposed bike and pedestrian trail that would link the village’s main downtown corridor from Beach View Park to Frank E. Murphy County Park in the Town of Egg Harbor. But to do that, similar to Fish Creek’s dream of extending a trail into Ephraim, the village would need to work with its neighboring community.

There are examples around the state of communities already working collaboratively to create, enhance or expand active-transportation infrastructure. In Racine County, for example, the White River State Trail connects communities over the span of 19 miles. In May 2021, the trail secured the necessary funding to tack on an additional 11 miles. Once complete, the rail-trail will connect the communities from urban Sturtevant to the east to rural Elkhorn to the west.

The route is part of the larger Route of the Badger, a Rails-to-Trails TrailNation project that involves finding ways to use existing infrastructure to expand and connect trails in rural areas, towns and urban centers. When complete, the network of trails will stretch more than 700 miles, spanning east to west from Milwaukee to Dousman, and north to south from Sheboygan to Kenosha. It currently consists of 323 miles of existing trails, including 50 miles of on-street biking routes.

This network of trails would mean not only increased recreational opportunities, but also more socially equitable transportation options for residents and visitors. With access to a regional trail network like this, people from all socioeconomic backgrounds would have the option to travel safely and conveniently from one area of the region to another, as well as to all the places in between.

Back to the Future with the Village of Egg Harbor Plan

Although the Village of Egg Harbor’s efforts are an example on a significantly smaller scale, if pursued, the proposed plan for a multi-use trail would involve a similar mindset.

“Rather than having a path that is immediately adjacent to the road, the idea is to tuck it back into the properties,” Sawyer said. “To do that would involve conversations with potential partners and landowners in between the village and the park, and obtaining easements on private property along County Road G.”

Even though the completion of the multi-use trail is still a few years off, it showcases what neighboring communities can achieve when they work together and think outside the box of traditional pedestrian infrastructure.

“We’re all dealing with similar traffic issues,” Sawyer said. “If we can look at ways to get people off the road, to create better pedestrian connections, it makes everyone’s life easier.”