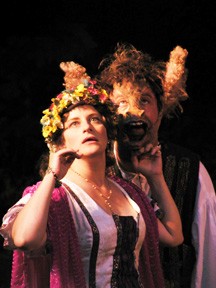 Suzanne Graff performs in the 2002 production of “A Midsummer Night’s Dream.”

In 1997, after Suzanne Graff and her husband Jerry Gomis had been having conversations with Fred Heide and Fred Alley about taking over the management of Door Shakespeare, they arranged for a meeting with the American Folklore Theater Board of Directors. The couple, who had been exploring fertility options and investigating adoption procedures, found that Suzanne was pregnant, and deferred the discussion until later; Door Shakespeare finally became their baby in 1999, after the birth of their son William.

Ten years later during the economic downturn of 2009, Artistic Director Gomis found himself between jobs in project management. Door Shakespeare endured, however, presenting only one show during an abbreviated season.

This spring as preparations for the up-coming Door Shakespeare productions of Twelfth Night and Pride and Prejudice were underway, Executive Director Graff learned that she required surgery for breast cancer. But once again, the show will go on.

“We keep rolling with the punches!” Graff said. “I’m still just a phone call away. But it’s strange to think of Door Shakespeare happening and me not there, missing out on the fun, taking care of interns, congratulating people.”

Her goal is to return for the second half of the run, and if her recuperation permits, possibly resume acting. When theater is in your blood, you find it difficult to stay away.

Young Graff began her career in theater at Divine Savior Holy Angels High School in Milwaukee. James Valcq, another native of the city, attended Marquette High School. The girls’ school collaborated with the boys’ school on theater productions, and during The Sound of Music, Graff and Valcq began a friendship that continues to the present.

“We palled around during our high school and college years,” Graff recalled. “He rented the Skylight Theater [in Milwaukee] to do Dames at Sea, and I was in it! During the following two summers, I helped out with two more shows, producing and directing for our Students Theater Workshop. Great times, like Mickey and Judy! People thought we were nuts, but they came to see the shows!”

In Milwaukee the friends went to the Oriental Theater to see low-budget science fiction films with “overly-serious movie writing,” Graff said. And then later in their lives, after not seeing each other for a couple of years, she ran into Valcq who was performing with Skylight.

“I saw him scrubbing his face in his dressing room after the show,” Graff said. “‘I’ve been thinking about you all week!’ he said, and told me he had been working on a show, writing a part for me!”

Zombies from the Beyond was a sci-fi parody with the part of Charlie written for her, a role that she originated and performed at The Players Theatre off Broadway.

Graff earned a BA in acting and directing from Indiana University – Bloomington. While in school she met Barry Saltzman, but later lost touch with him. Recently “he found me through the Internet,” she said, “and we caught up using Facebook.” Saltzman will be playing Andrew Aguecheek in Twelfth Night this season at Door Shakespeare. “I look forward to working with him!” Graff continued.

As a graduate, Graff trained with the National Shakespeare Conservatory in New York City. Through that program she met Jerry Gomis, a past graduate of the conservatory who was working as an instructor. They fell in love, worked as professional actors in the city, but found that many of the available parts involved touring (she traveled with the National Shakespeare Company) or regional theater.

“Whenever one of us got a job,” she said, “it meant going away for a time.” After the couple decided to marry, they “wanted to raise a family and were not keen on living in the city,” but wanted a more conventional lifestyle. “I have to have a yard!” she laughed.

They moved to Minneapolis where they now make their home with son William who is 12, and daughter Anna Marie, 11. “My kids talk about being interns with Door Shakespeare some day!” she said.

In addition to her work in New York and on tours, Graff has performed with regional theaters in Indianapolis, St. Paul, Minneapolis, Rome (NY), and Milwaukee; and she has appeared in films (It Could Happen to You won a NYC Short Film Award).

But acting and singing with American Folklore Theater in Peninsula Park in the ‘90s led to her favorite role, executive director/performer for Door Shakespeare. One year Fred Alley brought people from New York to do a workshop for the AFT company on doing Shakespeare in an unrehearsed style. “He thought this would be a quick and dirty entertaining way to do Shakespeare,” Graff said.

In 1994, AFT presented one performance of A Midsummer Night’s Dream in the unrehearsed style. The following year they performed Midsummer again and also Comedy of Errors in repertory at Bjorklunden concurrent with the AFT season. And in 1996 they did five performances of Twelfth Night, this time casting Gomis as Orsino and Graff as Olivia.

And the rest is Door Shakespeare history, in a sense coming full circle as Twelfth Night (along with Pride and Prejudice) will be performed this season.

“It sucked!” Graff said of her breast cancer diagnosis. “It took me by surprise. You never think it will be you.” Her mother and a good friend had the same disease, “and they did fine. They have been my teachers along the way. I know I’ll survive, but I have to take a different path.”

Graff’s surgery was successfully complete at the end of May and she is now recuperating.

And so will Door Shakespeare. “Sometimes it seems like the little engine that could!” she added.

For tickets and information about Door Shakespeare’s 2011 season call 920.839.1500 or visit http://www.DoorShakespeare.com.