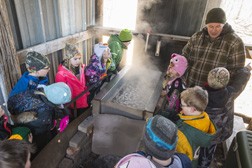 Southern Door Elementary students spent Friday, March 27, in the great outdoors of their very own 45-acre school forest, learning about the Maple syrup process from Southern Door School Board member Mike Toneys, his wife, Carrol, and other volunteers.

In 1970, a high school ecology class built a sugar shack for boiling sap collected from the school forest Maples, but it was non-functioning by the 2000s.

“The program went by the wayside and nobody wanted to do it anymore,” Toneys said. “In 2009 I joined up with a couple that has students in Southern Door, Angie and Mel Jonas. The Jonases do it at home. We got the program going in 2009 and we’ve been doing it every year since.”

He said 5th grade teacher Brent Claflin’s class does much of the initial tapping of the trees and collection of sap.

“Other kids primarily come out on the day of the boil,” Toneys said.

“Haley rearranged her high school schedule to be there,” Toneys said. “It was a very cold day and volunteers were there for pretty much the whole day. They just did a tremendous job.”

The students and their teachers also get to sample syrup from last year’s batch.

The Toneys finish canning or freezing the syrup at their home and keep it for events at the school such as the annual Garden Tasting from the school’s Learning Garden.

“My wife and I use some of it to make things like cookies. Last year my wife made some applesauce and flavored it with the finished syrup,” Toneys said.