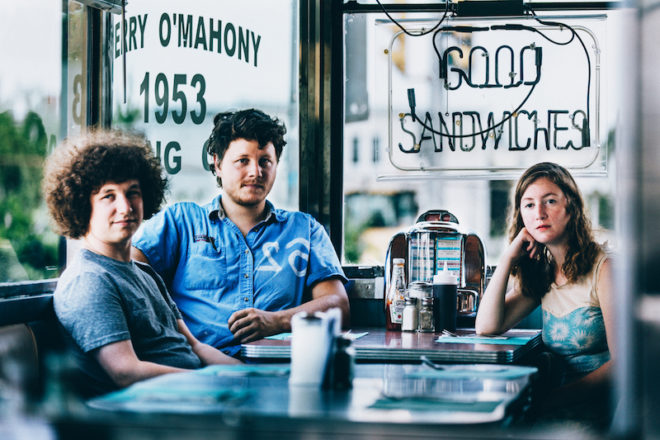 A flower with a name like honeysuckle sounds bright – it would taste sweet to the tongue and feel warm to the ears. This image is one that folk band Honeysuckle takes with it, though the roots of its name come from a place less sunny.

Perhaps it’s the deep, milky tones of Holly McGarry’s vocals dripping over the tight, calculated instrumentation that really makes one think of honey.

But Berklee College of Music was the glue that first stuck the trio –McGarry, Benjamin Burns and Chris Bloniarz – together. Though they were pursuing different majors, they had all encountered acoustic music in some form.

In a podcast called 5 Songs with Friends, McGarry talked about their musical upbringing. Burns plays the banjo, and his father was a Celtic musician. McGarry’s guitar teacher was a bluegrass musician, and Bloniarz had played in an acoustic cover band in high school.

Classic rock is also one of the band members’ mutual musical interests. Though they were already folk-leaning, it helped them to take a less traditional approach, classifying themselves as a progressive act.

McGarry confirmed what I suspected when I heard the song “Canary” in a live YouTube video: Bloniarz adds pedals to the mandolin, which allows him to add effects, changing and distorting the tone of the instrument. People have thought the group added electric guitar, when really it’s just Bloniarz – the one who dabbles in that arena more, McGarry said.

“Ben and I don’t really write in the rock way as much, for whatever reason. I don’t entirely know why. I guess we haven’t gotten angry enough yet or something,” McGarry said with a laugh. “We don’t do a lot of yelling, but Chris gets to be a little bit shreddy sometimes.”

Perhaps the band doesn’t get angry, but its members do get emotional. A lot of what they write about has been a way for them to process the events and people who have come in and gone out of their lives, McGarry said. It’s a way for them to better understand the impacts those things have.

“I think part of what drew us to be in a band together is that we do write about similar topics,” McGarry said. “We are usually writing about family and loss and just that confusion of who we are as people.”

Even the band’s name stems from a memory that Burns has from childhood: his first funeral, and honeysuckles all around the casket. The scent of honeysuckle now reminds him of that moment.

Songwriting from this angle allows it to come in bursts, McGarry said. Perhaps that’s why the band has had releases every year from 2015 to 2017, with an Audiotree live session in 2018.

This year Honeysuckle is releasing another record, Firestarter, and touring extensively in May and into the summer. The group has already released two singles, “Firestarter” and “Gaslight.”

The record will explore the theme of how we define ourselves as people and which factors – other people or the environment – may have a say in it.

“We’re each kind of focusing on a figure and a time that particularly affected and shaped us; who we are currently, which I think is interesting because we all kind of wrote them separately,” McGarry said.

Honeysuckle aimed to make the album as close to its live show as possible, and the group’s members are excited to take it on the road. In addition to all the other places beautiful places they’ll see on tour, they’re excited to come to Door County.

“We played Door County before, but we played it in the winter time,” McGarry said. “It was beautiful in the snowy nature, but it will also be nice to see it in the spring and sun hopefully. [We’re] really looking forward to that.”

Honeysuckle will perform at Door County Brewing Co. & Music Hall on May 17, 7-9 pm.