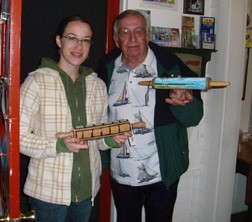 Sweetie Pies announced the winners in its 5th Annual High Roller Art Contest this month. First place was awarded to Gerald Richter of Sturgeon Bay with his entry “An August Day Sail.” Abigail Holzschuh of Baileys Harbor took second place with her work “Complex Square Abstraction.” Both Richter and Holzschuh have been recognized in previous High Roller contests. Newcomer Janine Morse of rural Sturgeon Bay came in third with her “Rock n Rollin.’”

Award winners are determined by popular vote at Sweetie Pies over the summer months. The contest is open to any budding or accomplished artist.

“We may be expanding on the theme of the contest next year to include other implements integral in pie-making or pie-serving,” said Renny Lea, Sweetie Pies co-owner, “so watch for the contest rules coming out early next year!”

All works will remain on display in the Sweetie Pies shop until the end of October. Many of them are available through a silent auction. Sweetie Pies is located at 9106 Highway 42, just south of Fish Creek at the Settlement Shops.