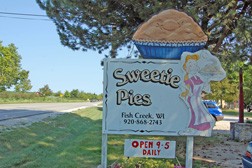 “She said the cherry pie was the best pie ever,” said Renny Lea, who owns the pie shop with her husband, Dave, and Cathy and Larry Mazurek.

A nurse who is a regular customer of the business and a subscriber to Martha Stewart Living recently stopped in to say Sweetie Pies is in a two-page spread in the September issue.

Since subscribers get the issue before it hits newsstands, Sweetie Pies owners had to wait a bit to buy a copy.

“I even had my cousin in Milwaukee looking,” Renny said.

But they finally got a copy and learned the shop is one of six businesses featured in a two-page spread sponsored by Toyota, featuring “creative entrepreneurs and artisans from coast-to-coast.” Along with Sweetie Pies at top center of the spread, there is a designer & illustrator from San Francisco, a creative retreat in Boulder, Colo., a hand-blown glassmaker in Fort. Payne, Ala., a Raleigh, N.C., man who makes guitar art from license plates, and a syrup maker in Brooklyn, N.Y.

It’s all part of an American-made event that culminates with several events in October in which businesses that have been nominated will be named winners. For more information, visit marthastewart.com/americanmade.

“We do it the old-fashioned way,” Renny said. “There are a lot of pies that are made in Door County, obviously, but very few do things by hand and use the old recipes. That’s how it got started and that’s how it stays, doing it the right way.”

By request, Sweetie Pies added gluten-free pies to its lineup this year.

“It’s a biggie because a lot of people are allergic and are looing for gluten free. It was not easy coming up with gluten-free,” Renny said.