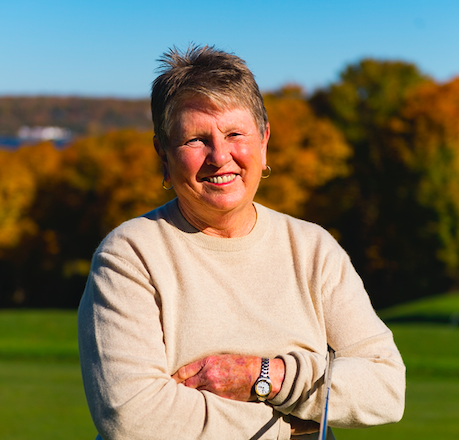 The following is adapted from the Summer 2019 edition of Door County Living magazine. Find the full feature about the life of Sylvia Ferdon at DoorCountyPulse.com.

Growing up in Oconto, Wisconsin, Sylvia Ferdon loved playing sports. She excelled in all of them, but none more so than golf – a fact that didn’t slip past her high school physical-education teacher, Jan Blumreich, who would nurture Ferdon’s skills and point her to a groundbreaking future in the game.

Blumreich would drive Ferdon two hours one way to Milwaukee, where she took lessons from Gordon Watson. He was one of the best teachers in the state – he’d eventually be inducted into the Wisconsin Golf Hall of Fame – but seeing Watson’s female assistant is what got Ferdon excited. That, and the concept of hitting golf shots in a dome during the Wisconsin winter.

Ferdon went on to letter in four sports at UW-Oshkosh (volleyball, basketball, field hockey and golf), then qualified as an individual golfer for the 1966 national collegiate championship. She would go on to coach – first at Florida State, then in Arizona.

In July 1977, playing alongside future members of the World Golf Hall of Fame, Ferdon carded a 305 playing 72 holes: plenty good to earn her membership on the LPGA Tour.

But if life tosses curveballs, professional golf throws 100-mph fastballs. If you’re not extremely dialed in, it’s difficult to catch up. After five fruitful years, Sylvia lost her status on the LPGA tour.

Two years of failed attempts to regain her status followed, and Ferdon arrived in Door County, down on her luck. She was visiting friends during the summer of 1984. A chance round came together at Peninsula State Park, where Wally Ellmann, a high school classmate of Ferdon, was the acting manager. The Ephraim golf course had lost its head pro and was looking to fill the position. Ellmann saw Ferdon smash her drive down the first fairway, and by the time she’d reached the 10th hole, she had been offered the job.

“At a time when I was really down and out,” she recalled, “I needed to re-establish my goals and purpose in life. That came along at the right time. I’m forever grateful.”

Golf has never been a sport that pushed women forward in front of men, but Peninsula State Park made that decision – and during the 1980s, no less. Ferdon was that good. Or maybe she was just that nice. Either way, she had an important gig.

There are many more steps in the golfing life of Sylvia Ferdon, and all of them matter. She worked at the park for the next 10 years, trekking down to Waco, Texas, in the spring to teach one-credit golf classes at Baylor University, where her husband, Doug, is a journalism professor.

She taught Door County golfers in the summer, Baylor students in the spring. With Ferdon, it could never stop there. In 1994, when the Baylor women’s golf team had a vacant head-coach position, she stepped in seamlessly. Though it meant a temporary end to her career at the park, she and Doug had locked up their Door County future by buying some land near Baileys Harbor for a cottage. Seventeen years later, she returned to Peninsula State Park.

Earlier this year, before another 18-hour drive north from Waco, Ferdon was asked to ponder a couple of basic questions: “Why golf? And why Door County?”

Of course, those questions are complex, but put simply, the most important people in Ferdon’s life have always been about golf – and about her golf. As for Door County, well, that’s where the game gave her something simple: the chance to make $12 a lesson when she needed it most.

“I got lucky,” Ferdon said. “And when you get lucky, you give back a lot more.”

Read much more about Ferdon’s life on the links by searching for “Sylvia Ferdon” at DoorCountyLiving.com.