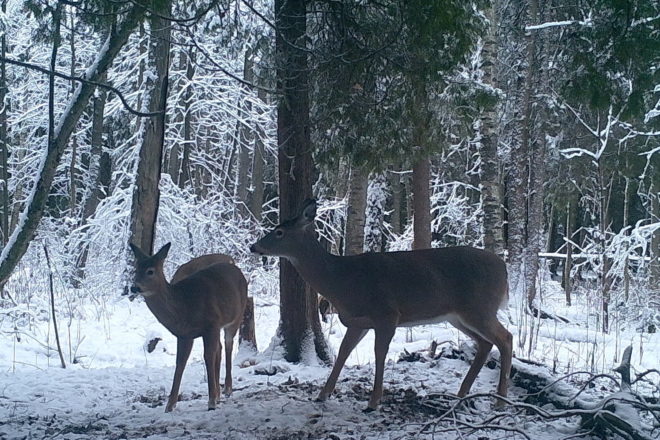 A doe and two fawns are shown in this Kewaunee County trail camera image, taken in January 2018. Submitted.

Those heading outdoors to enjoy the snow should remember that firearm deer hunts continue through Dec. 15 and are on again Dec. 24 – Jan. 1. Keep yourself, your family, friends and pets visible by wearing bright colors. Though not required unless you’re hunting, blaze orange is always a good choice.

In an effort to reduce deer populations so native plants and trees have a chance at regenerating, hunting is allowed on some land-trust properties, Nature Conservancy lands, county parks, sanctuaries and other areas where the public may recreate.

The Nature Conservancy has been working to protect land in Wisconsin since 1960, but it first began allowing deer hunting on some properties in 1985. The group says hunting is an important management tool in reducing white-tailed deer numbers that have grown beyond the ability of native plants and trees to withstand their browsing.

The conservancy also says hunters were some of the earliest conservationists in Wisconsin, and they continue to support habitat protection through hunting-license fees and taxes on guns and ammunition. Hunter contributions benefit not only game species, but also many other plants, animals and habitats that the conservancy is working to protect.

Similarly, the Door County Land Trust says hunters play an important role as conservation partners by helping to regulate and maintain the populations of deer and turkeys, which can negatively affect ecosystem health.

Many state parks in Door County are included in the gun deer hunts through Dec. 15, but not Dec. 24 – Jan. 1, and not currently at Peninsula State Park, which allows only muzzleloader deer during the regular nine-day gun season.

Bow and crossbow deer hunting are allowed in parts of the state parks through early Jan. 5. See maps of open areas and other restrictions at dnr.wi.gov/topic/parks/hunt.

To review specific rules about hunting on Nature Conservancy, Door County Land Trust, The Ridges Sanctuary and Door County parks properties, visit their respective websites. There is no hunting allowed at Crossroads at Big Creek.

Door County and Kewaunee County bow, crossbow and gun deer hunters combined to take more than 4,000 whitetails through Nov. 25, and they have likely surpassed the 6,000 mark by now. (This column was written before the DNR released its preliminary nine-day gun hunt totals. Check out the updated numbers by county and season at dnr.wi.gov/topic/wildlifehabitat/harvest/deerharvest.html.)

For those still looking for venison, there’s a lot of hunting left. The 10-day muzzleloader deer season runs through Dec. 11, followed immediately by a four-day, antlerless-only firearm deer hunt Dec. 12-15.

The bow and crossbow deer season runs through Jan. 5 in Door County, and, for the first time, through Jan. 31 in Kewaunee County.

Kewaunee County Board Supervisor Lee Luft is encouraging individuals and businesses to write letters of support for inclusion in a proposed Lake Michigan Marine Sanctuary.

Luft said the National Oceanic and Atmospheric Administration (NOAA) does not have authority over fishing regulations inside the U.S. borders, and this has been borne out on Lake Huron.

“My support for this sanctuary is based on the actual experience of the Thunder Bay Marine Sanctuary in Alpena, Michigan,” Luft said. “This sanctuary, now 17 years old, has been expanded once with citizen support, and another expansion is in the works. There can’t be a much clearer basis for support than these years of experience.”

Luft is hopeful that if the Lake Michigan Marine Sanctuary is eventually approved, the lakeshore area will see a renewed focus on its marine heritage as well as an economic boost, similar to what has happened with the Thunder Bay sanctuary.

However, there is opposition from some lakeshore sportfishing groups, businesses and shoreline property owners who are wary of any changes the federal government might enact if the sanctuary is approved. There’s even been fear-mongering that the feds would be able to divert water away from the basin.

My take? Though I have plenty of distrust for the feds, I think the Thunder Bay experience is reason enough to believe that they have no interest in messing with sportfishery, siphoning water and stealing land. The current proposal recognizes Wisconsin’s sovereignty over its waters and would create a co-management arrangement between the state and NOAA to manage historical resources in the sanctuary.

That said, you’d think a sanctuary focused on shipwrecks would include Door County because there are more wrecks here (more than 200) than in all the other proposed counties combined.

The Kewaunee County Board might hear from the public and vote on the proposed marine sanctuary during its Dec. 17 meeting. Learn more about the proposal at sanctuaries.noaa.gov/wisconsin.

A new map highlighting damage done by the emerald ash borer is available at dnr.wi.gov (keywords “new map illustrates damage from EAB”). It shows Door County at greater than a 50 percent decline in the ash population and Kewaunee County at less than 25 percent.

Whatever the level of damage, homeowners and landowners should consider treating healthy ash trees and/or removing declining, untreated trees before they become hazardous and even more costly to remove.