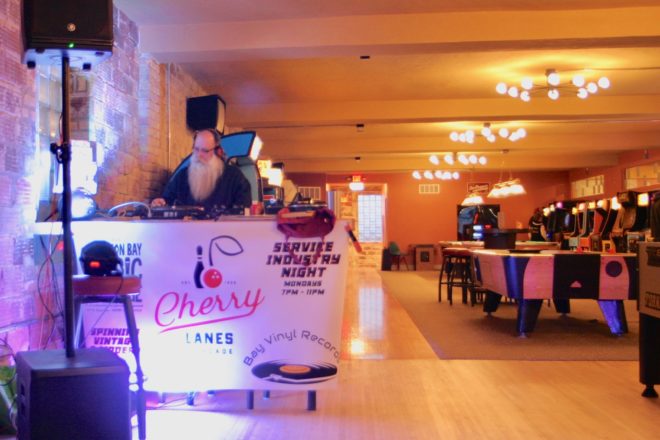 Any idea where you might be able to hear – in the course of one hour – music as diverse as The White Stripes, Beastie Boys, NRBQ, Big Country, Television, Boston, Weather Report, Horseshoes & Hand Grenades and the so-obscure-you-won’t-find-them-online Big & Bob Trio doing the lead track from its Dead Presidents album?

It’s Vinyl Night at Cherry Lanes & Arcade in downtown Sturgeon Bay, with DJ Tef Lon nonjudgmentally spinning records brought in by folks who want to share their album collections with whoever shows up on a Monday night.

Unlike certain other vinyl nights that will go unnamed at which the DJ acts as curator by refusing to play music that is too “common” (Stevie Wonder comes to mind), Tef Lon will tell you he has no agenda when spinning records. If you share them, he will spin them.

According to NielsenMusic, 2018 marked the 13th consecutive year of growth for vinyl sales. The top-selling album of last year was Guardians of the Galaxy Awesome Mix Vol. 1, with 84,000 copies sold, followed by Michael Jackson’s Thriller and Fleetwood Mac’s Rumors.

At the May 6 edition of Vinyl Night, Mike Judy and April Pate were enjoying the scene for the first time. Mike had with him Weather Report’s 1977 Heavy Weather and NRBQ’s 1978 release At Yankee Stadium (which, despite the title, was not recorded at Yankee Stadium, but was a nod to bass player and Bronx native Joey Spampinato, a lifelong Yankees fan; the band did visit empty Yankee Stadium but did not play there).

Although the couple – who perform as the musical duo Spike and April – just moved to Door County in November from Minnesota’s Twin Cities, more than a quarter-century ago, Mike lived in Door County and performed in a trio called the Steamy John Band, which is how he first got to know Tef Lon as a top-notch soundman for bands.

“We’ve been reading about this Vinyl Night in the Pulse listings for months,” April said. “Tonight we resisted the urge to stay home. Get off the couch, get out of the woods, come to town, have a beer, meet some people.”

“We’ve always come by this place and thought, what in the hell is in there?” Mike said. “Vinyl Night is a cool thing. If you dropped this place into Minnespolis or St. Paul, this place would be packed.”

Mike said even though this was their first Vinyl Night, “We are regulars now.”

Bay Vinyl Records at 325 Kentucky St. in Sturgeon Bay is a sponsor of Vinyl Night. And besides the eclectic music, another perk is receiving a raffle ticket with a drink. At some point during the night, Tef Lon picks a raffle ticket, and the winner receives a coupon to use at Bay Vinyl. And the circle continues.

Vinyl Night runs from 7 to 11 pm on Mondays at Cherry Lanes & Arcade.