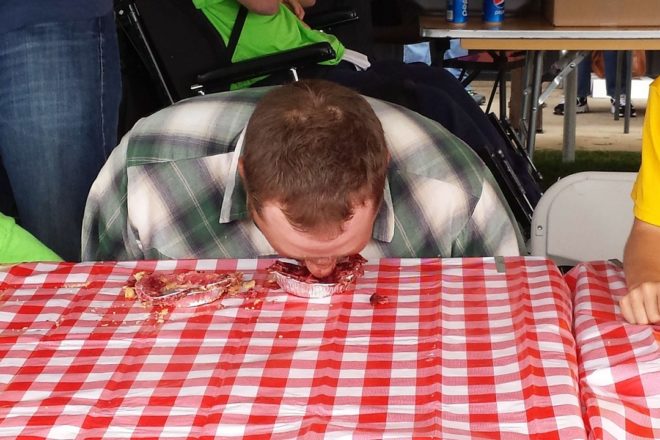 Corn is in the air. And so are bits of cherry pie. Flying off cobs and out of pie tins as hungry jaws clamp down on their prize in a race to completion. On Sept. 9, attendees will flock to Schopf’s Dairy View Country Store in Carlsville to enjoy the huge corn maze, food and drink, a cornhole tournament, and – you guessed it – corn and pie eating contests at this year’s Corn Fest.

Jason and Brian Leist of the band Modern Day Drifters, who play every year at Corn Fest, have garnered reputations for the ferocity with which they test their mettle every year.

Modern Day Drifters started playing Corn Fest five years ago. It was that year that Jason and Brian were talked into participating in the pie-eating and corn-eating contests, respectively; speed races to see who can eat most like a maniac. They’ve both taken home first place many times.

Luckily for the contestants, Corn Fest’s competitions don’t challenge eaters on how much they can eat; it’s purely a sprint for the finish. Sweetie Pies of Egg Harbor supplies the pie – one 4” miniature cherry pie per eater – and Sully’s Produce of Sturgeon Bay supplies two ears of corn per contestant.

The rules for the pie-eating go like this: Hands behind the back. Don’t be too messy, or you’ll have to clean up after yourself. Throwing up is an automatic disqualification. First to finish their pie wins.

“You gotta get mentally into it,” Jason said. “And you have to get rid of your gag reflex. You have to eat so fast…Sometimes your gag reflex comes back a little bit and you’re like, ‘uh oh,’ and you think you’re going to lose it, and you take a minute, swallow, and keep on going.”

After four years of Jason tearing up the competition, the Corn Fest officials decided to level the playing field. Last year, they had Jason eat two pies instead of one. He still managed to get third out of 12 eaters.

Jason’s pie eating has gone beyond Corn Fest. Whenever the Drifters play a festival that pits pie eaters against each other, Jason steps up to the plate. He’s won at Lautenbach’s and a Relay For Life event, and even branched out and won Wilson’s Ice Cream eating competition one year. 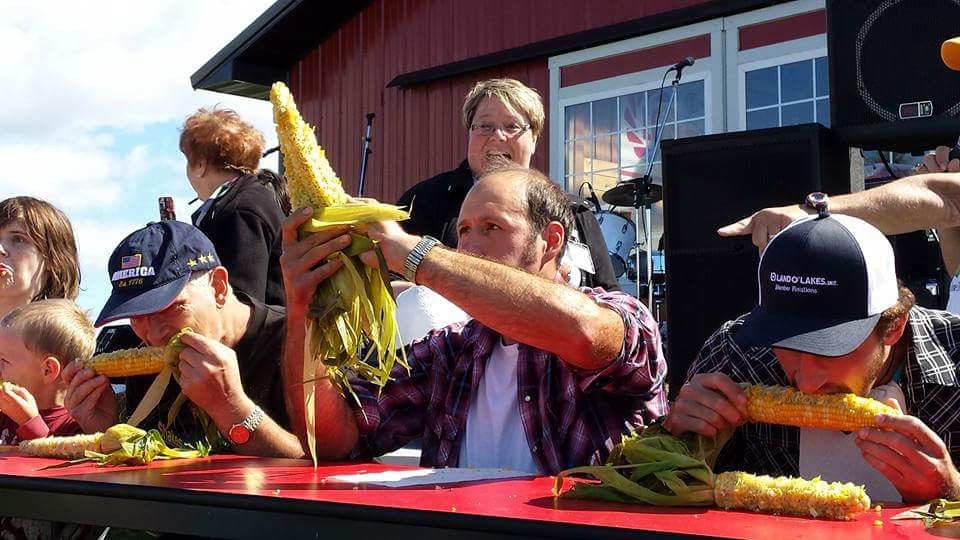 Though not as infamous as his brother Jason, Brian and his corn-eating skills are nothing to chew your cud at. Employing “the old typewriter technique” to amazing effect, Brian agrees the competitions are more mental than physical.

“Sometimes you do bite off more than you can chew. You just have to stop for a second, make sure everything is right again, and then go at it,” he said.

The rules are less limiting for the corn contest than for the pies. Thank goodness contestants can use their hands. Two rounds of corn-eating accommodate many eaters, with Miss Door County usually making an appearance.

Both brothers warn of entering into competitions with hot – or cold – foods. That much heat or cold can tear up your pie-hole, whether it’s not-properly-cooled corn cobs or a pint of rock-hard ice cream.

Corn Fest has been running the eating competitions since the event started 15 years ago. Organized by Sunshine House and hosted by Schopf’s Dairy View Country Store in Carlsville, they’ve managed to have a consistent turnout for the event, with Corn Fest becoming one of Sunshine House’s larger fundraisers.

“A core group of staff puts their blood, sweat, and tears into Corn Fest every year to make it happen,” said Jenn Starr, chair of the event. Sunshine House has been providing services for people with developmental disabilities since 1971.

So even if you’ve already eaten your share of sweet corn, be sure to stop by Corn Fest to witness a few dedicated individuals make food disappear before your eyes. It might be best to not stand too close.

The 15th annual Corn Fest will be held on the grounds of Schopf’s Dairy View Country Store, 5169 County Road I just east of Carlsville. The event runs from 9 am – 4 pm.