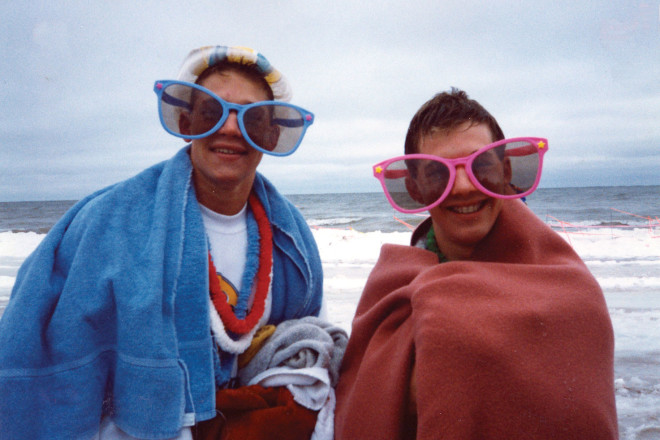 January 1, 2011 marks the 25th anniversary of the Jacksonport Polar Bear Club Plunge – an event in which hundreds of daredevils celebrate New Year’s Day by charging into the frigid waters of Lake Michigan at high noon. Founder J.R. Jarosh reflects here on the evolution and highlights of this (truly) mind-numbing spectacle. To learn more about the plunge, visit doorbell.net/pbc.

Q:  How many people participated in the first plunge? 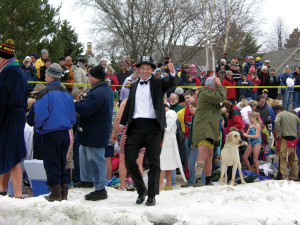 Q:  How many people participated in last year’s plunge?

Q:  Where did you get your tuxedo (and how many times have you worn it)?

A:  I wore a bowtie and cummerbund along with my swimming trunks to celebrate the 10th annual swim on January 1, 1996 and did that again in 2001 for the 15th anniversary. I’ve worn the full tux every year since the 20th anniversary in 2006. The original tux came from a tux shop in my hometown of Dubuque, Iowa, with additional pieces added from Bargains Unlimited. Hats off to Tip-Top Dry Cleaning in Sturgeon Bay for dealing with the sand and frozen seaweed every year after the swim.

Q:  What is the strangest thing that you have seen?

A:  This is a vast category. Overall, the strangest thing is that every year people keep coming back. To see thousands of spectators and hundreds of swimmers on the beach in Jacksonport, Wisconsin is really very strange, especially given that on any other day of the year a crowd of 25 people on the beach is highly unusual.

Q:  Who is the oldest person to participate, that you know of?

Q:  Who is the youngest?

A:  Again, due to the scope of the swim now I’m just not sure. I know six and seven year olds have tried it, but I strongly encourage parents to wait until their children know what they are in for before having them participate. No one likes a traumatic Polar Bear experience.

Q:  How does one train for it?

A:  Like many difficult tasks in life, I feel this is more of a mental challenge than a physical one. I can verify that after 24 swims, it’s still damn cold, but I also know that the smile on my face from doing it lasts a lot longer than the goose bumps do.

Q:  Where did the logo come from?

A:  My dad, Joe Jarosh, created the logo in the early 1990s with help from a graphic artist in Dubuque, Iowa.

Q:  How many people have been taken to emergency care? 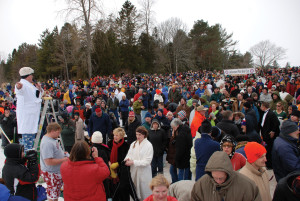 A:  Zero have needed emergency transport, though there was one mild case of hypothermia treated on site around 2001.

Q:  How many Emergency Medical Services people are on hand?

A:  The Jacksonport Fire Department and first responders typically have around a dozen members on hand before, during and after the event to ensure the event is as safe as possible for all attendees.

Q:  What inspired the first plunge?

A:  In 1984 I bet my Dad that I could beat him in the Sister By Fall Fest 5 Mile Run. The loser had to swim in Jacksonport after the race was over. I was 11 and he was 40 at the time. He won, and I swam. Doing that swim in late October started the wheel of thought turning…how many months of the year could I swim in Lake Michigan? Two years later I went in on December 26th when my family was in Door County for the holidays. The rest is history.

Q:  When did the club begin to grow?

A:  After swimming alone in 1986, 1987 and 1988, we read a story by a young writer for the Door County Advocate, Heidi Reiche (now Heidi Hodges), who had been trying to start a Polar Bear Club in Door County without success. After reading her story in January, 1989 we contacted her and invited her to join me in Jacksonport. She showed up along with a co-worker, Richard Herschleb, and club membership surged to three swimmers that year. 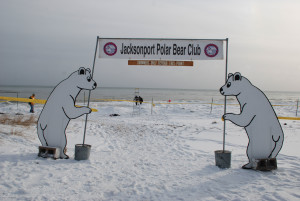 A:  We had three generations of one family do the swim together in 2007 – Clayton (Junior) Haen took the plunge with his son Steve and grandson Logan. Also that year the entire Sevastopol varsity girls basketball team took the plunge while wearing their uniforms.

A:  In 1990, former Green Bay Packer center and current radio announcer Larry “The Rock” McCarren came to Jacksonport to take the plunge – he got extra style points for both wearing an old-time two-piece men’s swimming suit (top and bottom) and losing the bottoms as he ran out of the lake.

Q:  Is it true the Polar Bear Club is international?

A:  Yes, after emailing back and forth for several years and exchanging Polar Bear Club t-shirts with a club in Gdansk, Poland, two of their members made the trip to Jacksonport in March 2009 to celebrate an “International Polar Bear Club Summit” with a plunge into Lake Michigan with a handful of Door County Polar Bears. It was great to see their methods – they exercised for four or five minutes first with a brisk run and then were un-phased to wear their underwear into the lake. They usually just cut a hole in the ice of a small lake in Poland and sit in the water up to their chins, so I guess this seemed like a breeze.

Q:  You’ve had two brushes with Hollywood. Tell us about the first. 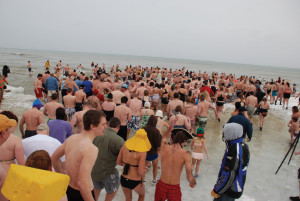 A:  In February 2002 I got a phone call at home and noticed on the caller ID that the call was coming from 20th Century Fox in Hollywood, California. It was a representative for the soon-to-be-released animated movie Ice Age who had seen our website and wanted to know if we would be a part of their outdoor movie premier in the parking lot at the Mall of America in Minnesota. A month later they spent a few thousand dollars chartering a tour bus to pick up 50-plus Door County Polar Bears and haul us to the movie premier. Of all of the memories I have from that trip, I’ll never forget walking from our “undressing” room in the mall basement up and through the crowded mall with 50 of my friends and family members all wearing just our bathing suits. We caused a few double takes. The other surreal memory was an image of actor John Leguizamo in his boxer shorts sitting between my parents, all three on a huge ice block. After sitting on an ice block for 90 minutes watching the film, it was great to see ourselves on Access Hollywood and Entertainment Tonight with smiles on our faces, enjoying the show.

A:  Alison Abrohams, one of the producers for Feed the Fish called in 2009 to tell me about a movie script she was working on that featured the Jacksonport Polar Bear Club as part of the main story line with a Polar Plunge as the final scene of the movie. That was the first of many conversations with Alison, the other producer Nick, and director Michael Matzdorff. Being involved with the movie was quite an experience and, as I stood in a wet tuxedo for several hours between takes while filming the final scene, I developed a whole new level 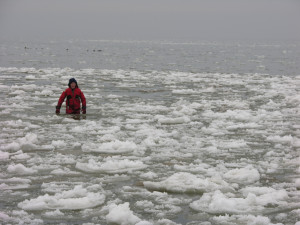 of appreciation for actors and the film-making process.

Q:  What were the worst conditions?

A:  The gale-force winds and TV-sized floating ice chunks that greeted swimmers on January 1, 2009 were simply awful. If you did the swim that year, I salute you.

A:  There have been two or three years when we were able to run right into the lake from the sand. I used to jokingly complain about those years until the aforementioned 2009 New Year’s Day swim – now I’m not complaining.

Q:  What have you learned as a Polar Bear?

A:  In December 1988 I was 16 and either fearless or foolish – probably a nice mix of both. A Christmas Day visit to Cave Point the day before my winter swim revealed no ice build up on the rocky shoreline, so I set my sights on a double dip that year. After my customary solitary plunge into Lake Michigan in Jacksonport’s Lakeside Park, my supportive dad and brother and my worried mom drove me out to Cave Point to see if I’d actually do it. I took off my jacket and towel and, in my still-wet swimming gear from the last plunge, I jumped off the edge and fell three or four feet into 12 feet of very cold and seemingly very deep water. I thought my heart might actually stop and not start again. I surfa 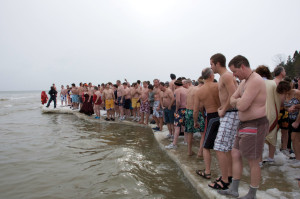 ced, gasped for air, and was glad I had done that for the first and last time. I later learned that the unsettling feeling of my heart seemingly stopping is known as the “Mammalian Dive Response” and is a way we mammals have of protecting ourselves. When cold water hits our faces and bodies, our heart rates can drop 10 to15 beats per minute almost instantly – information that would’ve been nice to know before I jumped!

Q:  What makes for a successful plunge?

A:  To me and other hard core Polar Bears, the wet head is the true sign of a successful Polar Bear Plunge. While we applaud all Polar Bear participants that get out into the lake on New Year’s Day and leave with wet feet or even a wet mid-section, complete submersion separates the men from the boys and the women from the girls. My wife Nell and I were dating during her first Polar Bear Plunge in 2004, and when she came out of the lake that day with a soaking wet head I knew it was the start of a long and wonderful relationship.

A: “I will if you will.” This simple statement has done more to boost our club’s membership numbers than lost bets and New Year’s resolutions combined. It is human nature to wonder how a seemingly insane act can be so much fun to a relatively normal person. As people have asked me questions over the years about the Polar Bear swim, I always enjoy seeing that glimmer in their eye as they turn to their buddy, boyfriend, girlfriend, spouse, sibling, child or parent and lay down the gauntlet with a simple “I will if you will.” With the countdown on to the 25th annual swim on January 1, 2011, I would love to see 1,000 swimmers take part. To help make that happen, I’d love to extend to you, the reader of this article, a very heartfelt and personal “I will if you will.”