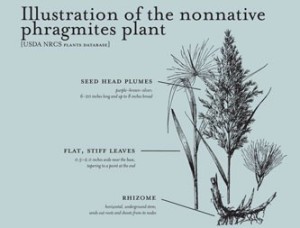 Last fall the Town of Jacksonport got serious in its desire to eradicate Phragmites by adopting an ordinance that allows for daily fines of $50 to $200 for residents who fail to destroy noxious weeds on their property.

“We had some properties we could not reach anyone to get permission slips to treat Phragmites, so this ordinance gives us the right to spray and add the cost to their tax bill,” said Jacksonport Town Chair Randy Halstead.

Phragmites is a wetlands invasive species also known as the common reed. It is an insidious invader that becomes quickly established with a network of underground rhizomes that store energy and can recover from cutting and burning. It can also spread through root fragmentation, seeds or cut stem fragments. Once established, they create near-monotypic stands of Phragmites, replacing communities of native plants in wetlands and coastal areas.

“We had acres on our beach,” said year-round Jacksonport resident Jo Wahlen. “They took over the beaches in Jacksonport in 2010.”

Property owners undertook an intense spraying program for two years, and then the program was underwritten by Door County Soil and Water for two more years, which resulted in a huge decline in the Phragmites population.

“However if we do not continue to treat they will be back in full force,” Wahlen said. “This year Soil and Water is moving to a more densely populated area, but we still have enough to keep treating.”

The Shores of Jacksonport Neighborhood Association is undertaking and underwriting the cost of the Community Service Phragmites Control Program for 2015, and residents are teaming up with the Door County Invasive Species Team (DCIST) to map out remaining Phragmites stands.

DCIST has been successful in implementing two years of Phragmites control on all Door County shorelines through a program that began in 2012. DCIST members are aiding in the organization and establishment of the Jacksonport control program for 2015 by offering technical advice and volunteer training in Phragmites identification and mapping.

“Kari Hagenow from the Door County Invasive Species Team is coming to train about eight people to map the beach for Phragmites,” Wahlen said. “In the last two weeks in July they will walk the beaches and note where they are so they can be treated in the fall.”

Jason Wilke, a regional certified commercial aquatic herbicide applicator who has sprayed the Jacksonport beaches for at least the last four years, will obtain the permit and will do the spraying in the fall of 2015.

If you own shore property along the shore in Jacksonport or the southern portion of Baileys Harbor that has been treated along with Jacksonport the last few years, you will be receiving a permission form for the treatment of Phragmites for the fall of 2015.

“We are trying to emphasize, even if they don’t have Phragmites, they should send the form back to spray. We need a contact for everybody on the beach,” Wahlen said. “Even if they think they don’t have them, they could turn up at a later date.”

Wahlen also wants residents to know they should not mow Phragmites stands. “If you mow them, they travel underground to the neighbors,” she said. “Let them grow so that they can be seen to be treated in the fall.”

She pointed out that once the form is signed, residents do not have to worry about the town imposing fines for Phragmites.

“The intention was to clean up the Phragmites not fine the people,” Wahlen said. “The idea is they should sign it.”

The Permission to Spray Form must be signed in order to be included in the spraying this fall. Signing the slip will allow the team to inspect your property for Phragmites and treat them if found.

The Door County Invasive Species Team (DCIST) seeks to halt the invasion of exotic non-native plants by empowering citizens with the education, the tools and skills necessary to control invasive species. For more information on DCIST, visit map.co.door.wi.us/swcd/invasive.