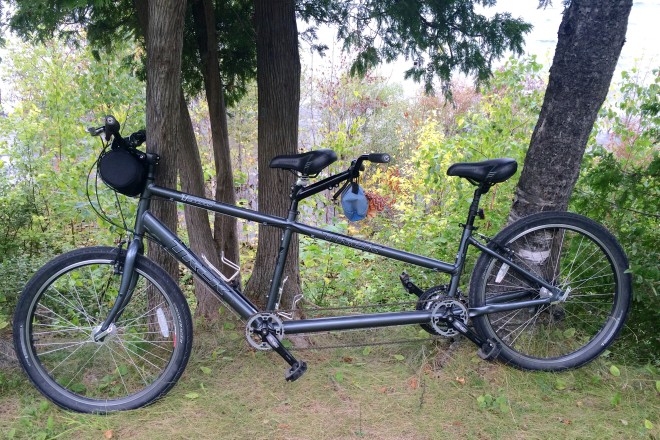 Trek Tandem from Nor Door Sport & Cyclery in Fish Creek.

We both loved the bike before we were out of the Nor Door Sport & Cyclery parking lot.

“It’s so much easier to pedal,” he said, which was an understatement. Riding the rental, I felt like I had lost about 20 pounds. We marveled at the large selection of gears.

The black Trek Tandem from Nor Door Sport & Cyclery in Fish Creek was much different than the tandem we were used to: a Schwinn Twinn with silver fenders and a two-speed kickback. The Schwinn is a charming, classic steel tank.

My father purchased the bike from our neighbor. Jeff, the neighbor, was extremely reluctant to sell it but felt compelled to do so, as his girlfriend had issued some sort of ultimatum regarding their relationship and his basement full of bikes. 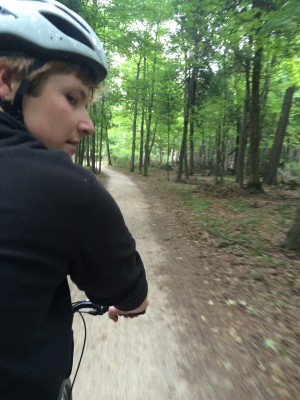 Gabriel Peterson takes the lead on a tandem bike in Peninsula State Park.

Dad believed it would primarily serve him and my mother, but being the same height they fit awkwardly on the bike—the backseat didn’t extend far enough and one person’s legs always hit the handlebars of the driver.

The tandem did not fit my parents, and so my boyfriend Gabriel and I took it up. For the first and probably only time in my life, the fact that I did not inherit my mother’s long legs gave me an advantage. I fit perfectly on the backseat.

I’m sure, at first, that Gabe and I had the usual unease about speed and turns, and communicating before we kicked back to shift gears, but I do not remember it. I believe tandem bikes are the most charming mode of transportation and jumped at a chance to use one in Door County.

A few feet out of the Nor Door parking lot, almost into the park, we encountered our next (and far less pleasant) surprise. A heavy man, clad in an enormous leather Harley Davidson coat shouted “Sidewalk! ***holes” at us as we passed by.

Gabe, whose father was nearly killed in a hit-and-run while on his bike, is especially sensitive to street traffic.

I had never encountered someone who treated a tandem pair so poorly.

“People love the tandem,” I called to Gabe, incredulously. He turned into Peninsula State Park, and then onto Sunset Trail.

“Families, and couples, and old people especially,” I was incensed.

We pedaled along and I took advantage of my position in the backseat to stare at the forest, and imagine what would happen to that shouting man, with his beard like a drugstore cactus, if he traded his v-twin engines for a Schwinn Twinn.

I kept pedaling. It was a cool evening; we enjoyed the breeze as we sailed along. When I ride in the back of the tandem (which, at home, is all the time) I like to stretch both my arms out when we ride downhill, even though it slows our descent. Every so often I gave Gabe a pat on the back.

We stopped to photograph the bike at one end of Sunset Trail, and Gabe suggested we switch seats.

He raised the backseat and I assumed the driver’s.

“This is awful!” Gabe shrieked into my left ear. We teetered along a flat tar road overlooking Lake Michigan.

“Oh, I really hate this,” he said, and our bike lurched left and right. My fingertips were white; I was gripping the handlebars so hard.

“We look like Tandem rookies,” I called back, “this is so embarrassing.” 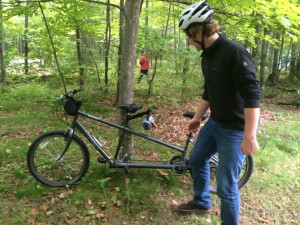 Gabriel Peterson prepares to mount a tandem bike for a ride on Sunset Trail in Peninsula State Park.

On our first tandem ride, I imagine that Gabe and I had a similar exchange, only we had both forgotten about it. We were so comfortable on our bike and so fond of it, we must have edited out the memory of the awkward first ride.

Gabe, unaccustomed to not steering or having any control over the bike, leaned from side to side.

“Please, Abbey, go in a straight line.” He sounded afraid for his life.

I cannot think of any other activity that is so synchronized, and makes one so aware of their partner’s participation. There is no hiding on the tandem; if one person stops pedaling, it is immediately obvious.

Gabe still seemed to be in survival mode.

“Let go of the handlebars,” I told him.

The wobble lessened and I felt more in control of our direction.

We regained our stride a little further down the road.

I have heard tandem biking described as a “relationship tester.” This is a slightly dramatic description. If it is a test, most will pass after five minutes of practice, in tandem.

Ready to give tandem biking a try? Check out the rentals at Nor Door Sport & Cyclery or Edge of Park Rentals, both in Fish Creek.