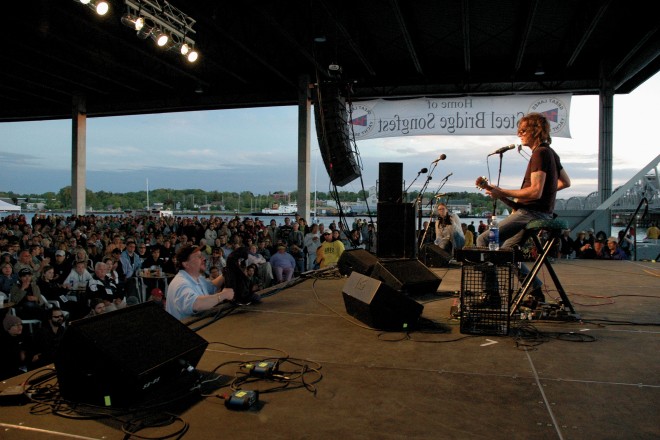 Door County’s reputation as a haven for the arts is strong and far-reaching; each year, the peninsula lures countless artists and non-artists alike with its vibrant art and music scene. But long before the days of galleries, potteries, and outdoor theaters, visitors were drawn to the peninsula by its vital position in the Great Lakes, making Door County a hub of production, industry and commerce.

Since 2005, an ever-growing band of enthusiasts have been working to maintain the link between Door County’s industrial past and its artistic present through the Steel Bridge Songfest, an annual music festival that celebrates one of the peninsula’s oldest industrial landmarks, Sturgeon Bay’s steel bridge. According to organizers, the Steel Bridge Songfest is a place “where our industrious past meets the creative future.”

The Steel Bridge Songfest began modestly enough, if one can call a concert featuring chart-toppers like pat mAcdonald and Jackson Browne “modest.” The first Songfest occurred in June 2005 and consisted of a one-day outdoor concert at Great Lakes Yacht Services. The concert was organized by mAcdonald, still the creative director of the Songfest and one of the primary driving forces behind the festival.

“I had asked Jackson [Browne] if he would ever be interested in coming here and singing a song on the bridge, because we were thinking of doing some kind of a bridge awareness day and he said, ‘Sure.’…It might have actually been his idea,” mAcdonald recalls. “Then one day [my] little brother, Bob MacDonald, who’s kind of a marketing whiz, came up with the idea of having a festival and calling it Steel Bridge Songwriters’ Festival…I thought we should shorten ‘Songwriters’ Festival’ to ‘Songfest,’…and [my sister] Christie and I then put on a show.”

The centerpiece concert of the Steel Bridge Songfest (SBSF) (affectionately called “Take It to the Bridge” by festival organizers) has always been held outdoors, in full view of the bridge itself. In its second year, the festival grew to include an indoor component, “Take It Inside,” in which neighborhood bars and coffee shops hosted concerts indoors on the evenings leading up to Saturday’s outdoor extravaganza.

Since its second year, the festival has also included a songwriters’ workshop called “Construction Zone.” During the week leading up to the festival, some of the finest songwriters in the country gather at Sturgeon Bay’s Holiday Motel (in 2008, Holiday Motel renovations shifted the location of the workshop to Beach Harbor instead) to collaborate on songs inspired by and in honor of the bridge. Many of these songs are performed at concerts later in the week, and two fully-equipped studios are available around the clock for artists to record the songs they write.

Remarkably, all Construction Zone recording engineers work as volunteers, as do all the performers, including even the highest-profile musicians. The strength of this volunteer corps – and the success of the festival itself – is a testament to the passion and devotion the steel bridge inspires in its supporters.

“The original purpose of the event was to promote the bridge,” mAcdonald continues, “to promote it as a beautiful and practical icon and secondly to raise funds for its preservation. So far, funds raised from SBSF have been used for expenses related to its placement on the National Register of Historic Places – a status the bridge was granted last year, in large part due to funds raised by the Songfest.

While some dissenters see the bridge as unnecessary and unsightly, Songfest organizers cite the structure as an essential aspect of Door County’s everyday life and tourist industry. Event Director Olivia Lowery points out that the counteraugmented bridge (which was built with the capacity to be cranked open by hand if necessary) is one of only two of its kind in the country.

“It’s a vital link in our transportation system,” says mAcdonald. “It’s a unique structure of great interest, so it’s the perfect tourist attraction as well. And it has a lot of sentimental value for a lot of people, and it’s part of the unique character of Door County.”

Event Director Eric Leyendecker agrees. “In an area like Door County, when you grow up watching so many things being destroyed just to put up condos and resorts and destroying the beauty of the area, the steel bridge is something I’ve grown up with. It’s a symbol of Door County and its rustic nature and its history. To see something like that tossed aside – I don’t think that’s right.”

The protection of the bridge thus far is in part a demonstration of the power of the Steel Bridge Songfest, but mAconald is quick to point out that the Songfest is more about celebrating the steel bridge than fighting to save it.

mAcdonald explains:  “Steel Bridge Songfest and the fight to save the bridge are two different things. They’re both necessary, but SBSF is the friendly outreach part. We’re not fighting, we’re putting on a celebration. It’s not like we don’t know anything about the fight; some of us wear two hats sometimes…But SBSF is a creative endeavor to increase the value of that bridge by making it more popular.”

In the process of doing so, SBSF organizers have built a festival that is as exceptional for the music it produces as it is for the cause it promotes. This spring, the festival will release the fourth in a series of CDs featuring the songs written at SBSF’s Construction Zone. Jackson Browne attended the first few years of the festival and Jane Wiedlin of the Go-Gos has participated for two of the festival’s years. And those are just the big names; each year, what mAcdonald calls “a growing family of musicians” inundate downtown Sturgeon Bay with rock, jazz, blues, acoustic folk, country, honky-tonk, and hip-hop music.

Typical attendance at the outdoor concert (this year to be held at the foot of the bridge) is over 4,000. Because of the number of free festival events and the sheer number of the week’s music venues, good estimates of total festival attendance are hard to come by.

But the festival’s impact on Door County is undeniable.

Though the festival is only four years old, its organizers intend to continue it for a long time in the future.

“As long as the bridge exists, Steel Bridge Songfest will be here to serve it,” mAcdonald promises. “The bridge is both a vital centerpiece and a symbol of the community, and there’s no better symbol than a bridge for that kind of community spirit.”

The Steel Bridge Songfest will take place in downtown Sturgeon Bay from Thursday, June 11th through Sunday, June 14th. Saturday and Sunday’s free “Take it to the Bridge” daytime concerts will be held on Michigan Street, at the foot of the bridge. Evening concerts will be held at a dozen downtown bars and cafés. Shuttles will be provided to transport concertgoers between the festival’s various indoor venues. A variety of ticket packages for these indoor concerts are available online; general admission to the outdoor concert is free; donations will be appreciated. An updated and comprehensive list of venues, artists, and admissions fees can be found at www.steelbridgesongfest.org. The website also contains information about how to purchase VIP tickets, which include special concert seating, a cocktail party, and a meet-and-greet with Songfest performers. All donations to the Songfest are tax deductible, and anyone interested in volunteering for the festival should call (920) 562-1772 or email [email protected]