The public is invited to attend a Backers’ Audition to mount a Chicago production for The Tin Woman on Monday, September 29, 5:30 pm at the Peninsula Players Theater in Fish Creek. The event is organized by theatrical producers “Acts of Heart” and will feature cocktails, hors d’oeurvres and a chance to meet playwright Sean Grennan. RSVP to Mark Weston (847) 835-9507 or [email protected].

The Tin Woman started in an Indian restaurant in Jackson Heights, New York. My sister, actress Erin Noel Grennan, and I had gotten together for dinner there while she was in town. We had had a great time working together on Making God Laugh and I was casting around for my next project when she told me about a news article that she’d read years before about a woman who received a heart transplant and her eventual meeting with the family of the donor. I had one of those moments in which everything just kind of jumped up for me and, the next morning, I started writing it. I had originally sketched it as a romantic comedy, but having some real-life difficult times of my own right then, my eyes started to go other places. Themes of loss, grief, rebirth, found connection, and a kind of gallows humor started asserting themselves and I knew better than to try to fight them. Ignoring your muse is just begging for a serious ass kicking. I cranked away, a few readings, a bunch of development, lots of rewrites later, Peninsula Players took a flyer on it and I was booked for a summer in Door County. 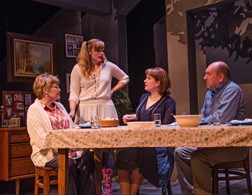 It was my second trip to Peninsula Players in the last few years, having debuted my play Making God Laugh there in 2011. On that occasion, I was only in residence for three weeks and didn’t even have a car to explore things. This time around my car, my dog, and I would be there for the entire summer. They were doing my new piece and I was also acting in the next two shows. Working on those plays, in that setting, with those excellent artists and for that audience: Heaven.

And now, against my rock-ribbed, DNA level pessimism, things seem to be getting even better. The Tin Woman was so well received that my publisher leaped on it and started promoting it feverishly while withholding it from smaller theatres. (They see bigger things ahead.) And now, a Chicago commercial producer is raising money to bring it down there and, if it succeeds, beyond.

On the 29th Peninsula Players is graciously hosting a “backers’ audition” for the show. (This is not a benefit for the Players.) What’s a “backers’ audition?” When a producer finds a show they want to see have a larger life, they go about lining up theatre venues, securing rights, contacting artists, and most importantly, raising money. Nearly everything you see on or off Broadway in New York goes through this process. Passionate people who believe in a piece, its message, its value, its potential as an investment, become “backers” to bring it to the next place. Our hope is that people who saw something worthy in the show, will want to ensure that it lives on.

My extended time in Door County gave me a sense as to what kind of unique, almost “best kept secret” place it is. I used to come up on vacations with my family when I was a boy. It’s still visually stunning but now I think there are more artists, writers, performers, musicians and art appreciators there than you can shake a Chagall at! I’m even working with Write On, Door County and Peninsula Players to inaugurate a new playwrights festival. And can we talk about the cherry pie?!

Full disclosure: certainly this is about my raging self-interest, absolutely! But also, I sometimes get the feeling that people on the coasts and in the bigger cities think that the only important work is being done where they themselves are; that the rest of us who do work in other markets are…quaint. Imagine what it would be like to say, “Oh yeah, that show that’s a hit in Chicago and New York and is soon to be a film with Meryl Streep? (Shut up, I can dream, can’t I?) It started in Door County.”