The Door Peninsula and the Bruce Peninsula are kin in environmental, geologic, economic and community aspects across the tops of Lake Michigan and Lake Huron. A group of Wisconsinites recently journeyed north to Tobermory, Ontario, for the Bruce Peninsula’s Annual Sources of Knowledge (SOK) Forum (May 8-10). This was the meeting of minds, the making of friends, and the merging of intent. John Greenhouse, one of the Sources of Knowledge organizers, likes to refer to this as the tale of two peninsulas. The one, Door, is our home here in Wisconsin. The other, Bruce, is home for our Canadian friends and colleagues. The common ground is the Silurian dolomite upholding the Niagara Escarpment, and all the life and habitats as well as our communities and businesses nestled upon and around it. 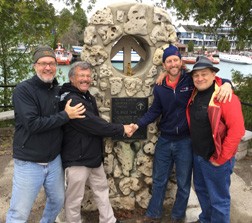 The Niagara Escarpment scribes a Great Arc: the extent and extant of the “ledge” from just south of Lake Winnebago, defining the Door Peninsula’s west coast, augmenting Manistique’s Garden Peninsula, climbing over the top of Lake Michigan and Lake Huron, forming the Georgian Bay coast of the Bruce Peninsula, on down to the firmament of Niagara Falls, and a bit to the east.

SOK is the innovation of the National Park Advisory Committee, and the Bruce Peninsula citizenry wanting to protect the Niagara Escarpment corridor. Their vision is to protect and enjoy the natural environment that inter-fingers with the towns and people along the Great Arc.

SOK was organized so that scientists, businesses, and lovers of the ledge could compare notes, find commonalities in purpose and protection, and to learn from each other about this marvelous and complex ribbon of nature and its many communities.

The similarities are the landscape and habitats, and the small unique communities that reside on the bays and shorelines. There are contrasts as well.

Other differences include the degree of land protection and development of parks. The Bruce hosts about 240 kilometers of trails on about nine square kilometers of property, Niagara Escarpment World Biosphere Reserve, two national parks (more than 156 square kilometers), an offshore lake (marine) preserve and numerous local parks.

The Door hosts five state parks and many county parks. Both peninsulas are at tipping points on how to best manage tourism, sustainable communities, culture, native heritage and business with the natural lands. It is clear that the SOK efforts and those of the Door County Land Trust and parks are critical drivers in environmental protection. Greater cooperation and planning is a result of this increased awareness. 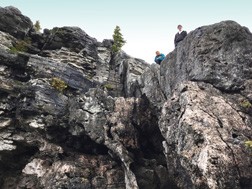 Nearly 150 people gathered in the Tobermory Community Center for the Great Arc event. Eric Fowle, executive director of Niagara Escarpment Resource Network (NERN) in Wisconsin, was a key organizer, as were members of the Sources of Knowledge board in Tobermory, including Bill Caulfield-Brown, Bill Graham, John and Jane Greenhouse, Gordon Nelson, First Nation perspectives from Lenore Keeshig, and others in this hands-across-the-peninsulas forum.

Out of our many discussions came the suggestion of forming relationships as “sister cities” between Tobermory and Ellison Bay, and “brethren peninsulas” for Door and Bruce as a stepping stone to greater interactions between these two important peninsulas.

For more information and excerpts from the talks visit websites for the Sources of Knowledge (sourcesofknowledge.ca) and the Niagara Escarpment Resource Network (escarpmentnetwork.org).