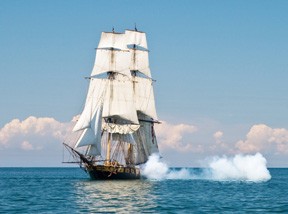 The world’s largest freshwater ecosystem – the Great Lakes – are being polluted with microplastics from a variety of personal care products that use plastic microbeads. Things such as exfoliating facial scrubs, body washes and toothpastes that contain the tiny plastic beads are washed down drains, through municipal wastewater facilities and emptying into the Great Lakes.

Dr. Sherri “Sam” Mason, associated professor of chemistry at State University of New York – Fredonia, led an expedition on the tall ship Flagship Niagara last year to sample the waters of Lakes Superior, Huron and Erie, where they found 1,500 to 1.7 million plastic particles per square mile in the lakes, with the highest concentration in Lake Erie.

Earlier this year, three personal skin care products maker – Unilever, The Body Shop and Johnson & Johnson – said they would phase out plastic microbeads form their products by 2015. Johnson & Johnson vowed to do the same by 2017.

While the plastic in the water is bad enough, the main danger is that the plastic absorbs toxins in the water. Researchers have already found polycyclic aromatic hydrocarbons (PAHs) and polychlorinated biphenyls (PCBs) in the plastic microbeads found last year in Lake Erie.