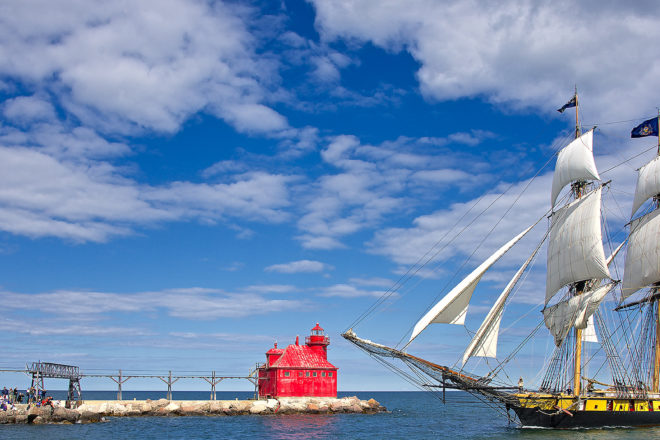 The flotilla of nine tall ships is expected to arrive in Sturgeon Bay late Wednesday afternoon, Aug. 3, after finishing the Lake Michigan portion of the Tall Ships Challenge Race earlier in the day in Algoma.

The parade and overnight stop in Sturgeon Bay is the prelude to the three-day Tall Ships Festival Aug. 5-7 in Green Bay, one of the eight official port cities of the Tall Ships Challenge Great Lakes 2016.

A new feature this year is the muster of the tall ships off of Algoma, the finish line for the 200-mile race from Chicago’s Navy Pier. The ships are expected to muster after the race around noon Aug. 3, within easy viewing distance of the harbor and Crescent Beach.

El Galeón: A 170-foot, 495-ton wooden replica of a Spanish galleon of the West Indies fleet.

U.S. Brig Niagara: A replica of the relief flagship of Commodore Oliver Hazard Perry, and serves as both historical artifact and sail training ship.

Madeline: A reconstruction of a mid-19th century Great Lakes schooner.

Appledore IV: Sailing out of Bay City, Mich., the Appledore IV’s mission is to foster environmental stewardship of the Saginaw Bay watershed and the Great Lakes ecosystem.

Pride of Baltimore II: A reconstruction of a Baltimore clipper ship, a class of vessel that were the most successful privateers in the War of 1812.

When & If: A 63-foot Alden schooner commissioned by Gen. George S. Patton. It was in the Patton family until a nephew of the general’s made a gift of the vessel to a school in Massachusetts, where she became the centerpiece in a sailing program for dyslexic children.