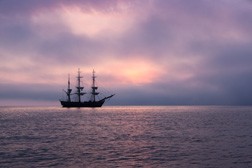 “HMS Bounty in the Mist” by Jason Mann.

Door County native and professional photographer Jason Mann will display his Tall Ships series at Glas Coffeehouse in Sturgeon Bay throughout March and will host an artist reception/open house on March 21 from 4:30 to 5:30 pm.

“Growing up in Sturgeon Bay, I’ve always been drawn to the water and the rich maritime history,” said Mann. “My grandfather, Bob Warner, was a captain, and I grew up hearing stories of his sailing adventures. When the tall ships came through in 2010, I had the idea of meeting the tall ships predawn at the assembly point on the lake and captured some pretty amazing photos.”

In his signature piece of the series, Mann captured the last voyage of the HMS Bounty through Sturgeon Bay before it sunk off the coast of North Carolina in 30-foot seas and being battered by 103 mph winds in October of 2012 during Hurricane Sandy. The 50-year-old replica of an 18th century square-rigger was arguably the world’s most famous traditionally rigged replica ship. The three-masted square-rigger appeared in several Hollywood films, including the Pirates of the Caribbean franchise.

Along with complimentary beverages, enjoy the sounds of the Songsmith Renegades who will stop in to play their unique mix of Americana, rock and country, with a hint of blues and jazz before they head over to Third Avenue Playhouse to raise funds for the United Way of Door County.

To preview Mann’s Tall Ships series visit proofing.jmannphoto.com/tallships, and for a sneak peek of the Songsmith Renegades visit songsmithrenegades.com.

Glas is located at 67 E. Maple Street in Sturgeon Bay and showcases the work of a new artist each month. Those interested can email Tammy VanDeBusch, [email protected], with photos of their work.