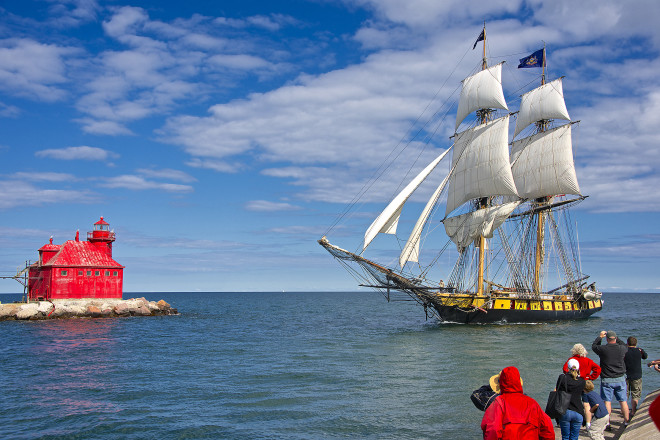 A modern-day Viking ship and a Spanish galleon are among the ships to be a part of the Tall Ship Festival that comes to Sturgeon Bay in August. Above, Len Villano captured the tall ships when they last came to Door County in 2013.

The creak of masts and flap of sails will fill the air in Sturgeon Bay this August as the city again hosts the return of the Parade of Sail of the Tall Ships Challenge Great Lakes. The flotilla of nine sailing vessels is expected to arrive in Sturgeon Bay late Wednesday afternoon, Aug. 3, after finishing the Lake Michigan portion of the Tall Ships Challenge race off of Algoma earlier in the day.

The parade and overnight stop in Sturgeon Bay is the prelude to the three-day Tall Ships Festival Aug. 5 -7 in Green Bay, one of the eight official port cities of the Tall Ships Challenge Great Lakes 2016.

A new feature this year is the muster of the tall ships off of Algoma, the finish line for the 200-mile race from Chicago’s Navy Pier. The ships are expected to muster after the race around noon Aug. 3, within easy viewing distance of the harbor and Crescent Beach. This sneak peek, as it is being billed, was always a hope for the planners, said Dawn Auguston, convener for the Sturgeon Bay planning group and marketing assistant vice president for Baylake Bank, sponsor of the Tall Ships Festival.

“We wanted to have something there so they could embrace it with their businesses and their nonprofits, and do something that would help the Algoma community as well,” said Auguston.

Algoma was a natural fit given the Baylake Bank presence there and the enthusiastic support of the Algoma Chamber of Commerce, she noted. 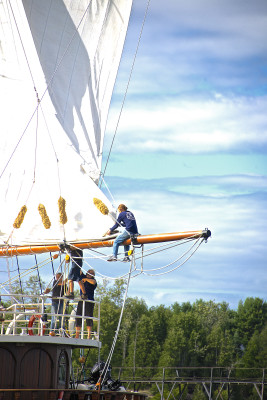 After the Algoma stop, the flotilla proceeds up the lakeshore to the Sturgeon Bay Ship Canal, where the ships will muster for the Parade of Sail, proceeding single file through the canal to the Bay of Sturgeon Bay where they will dock overnight. The parade will take place between 4-6 pm Aug. 3.

A prime viewing spot for Auguston is the canal station where the tall ships can be seen in full sail as they muster. She also likes to watch the ships docking downtown and the opportunity to talk with the crews, learning “how they spend their days, everything from how they cook to where they sleep.”

Activities for the Sturgeon Bay visit are not settled yet, but may include a maritime musical salute at Graham Park, which has been the venue at past tall ship visits. At their initial meeting Feb. 24, planners floated the option of extended hours at the maritime museum, charter boat excursions for up close viewing of the ships, and trolley service for shuttling visitors between the viewing sites and stores.

One of the main attractions will be the opportunity to sail to Green Bay aboard one of the nine vessels on Aug. 4 and a return excursion to Sturgeon Bay on Aug. 8. The one-way sail ticket is priced at $285, which includes admission to the three-day Tall Ships Festival in Green Bay. Bus transportation for ticket holders will be provided for $10 per person from Green Bay to Sturgeon Bay in time to make the ships’ 8 am departure from Sturgeon Bay. Duration of the Sturgeon Bay to Green Bay sail will run from five to seven hours.

The Green Bay festival gets underway with a ribbon-cutting ceremony at 11 am on Aug. 5 at Leicht Memorial Park. Food booths and live music will be conducted throughout the day during the festival. Other activities include an interactive kids zone, maritime marketplace, and tours of the tall ships. Friday activities conclude with nighttime fireworks over the Fox River. Children will be admitted for half price on Sunday Family Day.

Short day sails in Green Bay waters will be available Saturday and Sunday for $60 per person, as well as sunset sails for $85. Both of these excursions include festival admission. General admission is $12 for adults; $10 for children ages 5 to 12 and seniors; and free for children 4 years and below. Tickets go on sale this month.

Holly Williams, expo and event manager for PMI Entertainment Group, producer of the Tall Ships Festival, expects the festival to draw around 50,000 people, and contribute more than $3.6 million to the Green Bay economy.

“It is huge. It compares very closely to a game day, a Green Bay Packers game day, only spread out over three days,” said Williams. 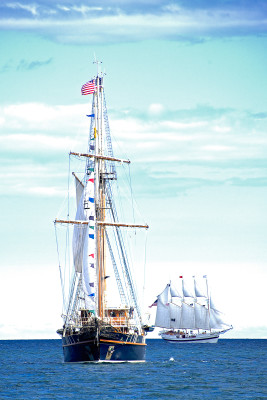 Door County Visitor Bureau president Jack Moneypenny sees the tall ships as an important tourist draw because it underscores the maritime tradition and focus of Door County, and showcases “what a great working port city Sturgeon Bay is.” Visitors to Door County, particularly during the week, are looking for activities, and the Parade of Sail is a great option for them, he added.

The two tall ships that have been confirmed for the challenge are from overseas: the Draken Harald Fairhair, a replica Viking ship from Norway; and the El Galeon Andaluic, a 170-foot replica 16th century galleon from Spain. Also expected in the flotilla are the brig Niagara from Pennsylvania; the Windy, the four-masted topsail schooner from Chicago; the schooner Appledore IV from Bay City, Mich.; the When and If Alden schooner from Massachusetts; the Pride of Baltimore clipper from Baltimore; and the Denis Sullivan schooner from Milwaukee. Both the Draken and the El Galeon will not offer excursions due to U.S. Coast Guard regulations regarding foreign vessels, but they will be available for dockside tours in Green Bay.

This will be Green Bay and Sturgeon Bay’s fourth time to host the tall ships, and the perennial challenge for Williams is the matter of weather. While conditions were fine for 2013, the wind proved too much for the land-based activities in 2010, with gusts pulling down festival booths. “Sometimes you think it is a nice day but it is either too windy or not windy enough for the ships to go out with their sails,” said Williams. Apart from wind, the ships will go out, whether in rain or sunshine, she added.