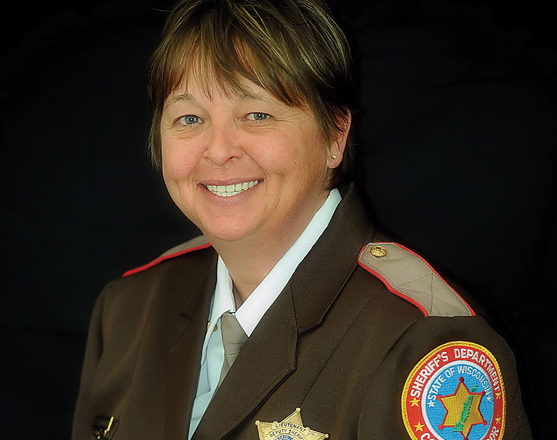 When Tammy Sternard ran for Door County sheriff in 2014, she didn’t do it to be a groundbreaker. After more than 20 years in law enforcement, including many in leadership, she was ready for a new challenge and knew she had something to offer. Ultimately, she did break ground as the first woman and first Democrat to run for the post. Although Sternard lost the election to Steve Delarwelle, she garnered 43 percent of the county vote, and in her mind, “opened people’s eyes to some different possibilities.”

Sternard is proud of how she ran her campaign and looks back without regret. “Steve and I both ran campaigns that were respectful. We had good dialogue, and we’ve maintained a good working relationship.” Sternard now works under Delarwelle as Door County jail lieutenant. Although she says she and Delarwelle were “similar in many ways” in their approach to the post, her campaign was distinguished by an emphasis on prevention, including a proposed increase in law enforcement in schools.

“When you’ve been in the law field as long as I have, you start to see a lot of patterns in families. When you’ve seen the grandfather, the father and the son come through the system, you think about prevention and how to break that cycle.” Sternard researched the topic, and championed school officers as a platform that made sense for prevention and community building.

Her approach to law enforcement is nothing but professional.

“It’s not my job to judge people,” she says. “As jail lieutenant, my role is to care for people properly, and offer them opportunities to change.”

Sternard says the best advice she ever received was early in her career, from a seasoned officer at the jail. “He told me, ‘Everybody is just one mistake from being here.’ It’s something I always keep in mind.”

In her current role, Sternard supervises more than 30 employees, and oversees the programs and operations of the jail. She is most excited about a new grassroots program she is developing to help inmates re-enter the community after incarceration.

“We’ve already got great community volunteers who provide everything from religious and spiritual support to parenting classes to financial skills. This program will take things even further. We want to see inmates coming out better prepared.”

She is also proud that Door County’s jail was the first in the state to offer sentence reductions for inmates who complete their GED.

“Sometimes incarceration gives people the motivation they need to make changes in their life and education is an important part of that.”

Arleigh Porter, Sturgeon Bay’s chief of police, has known Sternard since she was a young officer.

“I’ve seen her progress in her career,” he says, “and when she threw her hat in the ring for sheriff, I was very supportive.”

“She worked with a small group to build that facility from the ground up,” he says. “The amount of problem-solving that was required every single day was huge. She handled that in an exemplary manner.”

Like her experience with the Justice Center project, running for office was all encompassing. Running a campaign required sacrifices from her family, including her partner ReNee and the couple’s three children.

“The kids were really invested in the process,” says Sternard. After the loss, she was surprised that the children took it harder than she’d expected, but she knew there was a lesson to be learned.

“I can only hope that our kids learned the importance of being respectful while chasing a dream or standing up for something you believe in. I’ve tried to show them playing fair is always the best way to go, regardless of the outcome.”

After losing her bid for sheriff, Sternard jumped back into the political fray quickly, making a successful run for Southern Door School Board in the spring of 2015.

“If I could choose one term to describe Tammy, it would be servant-leader,” says Patti Vickman, superintendent of schools at Southern Door. “She’s a solution seeker and a great listener, and she has an ability to find common ground amongst people for the greater good.”

Although Sternard didn’t see her campaign as gender-based, she hopes her run will inspire others, female and male, to take a chance.

“What I’ve learned is when you believe in something, it’s about taking a stance. Others might scrutinize and judge, but at the end of the day, I’m okay with that. If you take your stance in a respectful way, you can never go wrong.”

Sternard is a firm believer that everything happens for a reason, but says she’s still pondering the meaning behind her recent quest. Will she make another run for sheriff?

“If I had a dollar for everyone who asks me that question,” she laughs. “I just don’t know.”