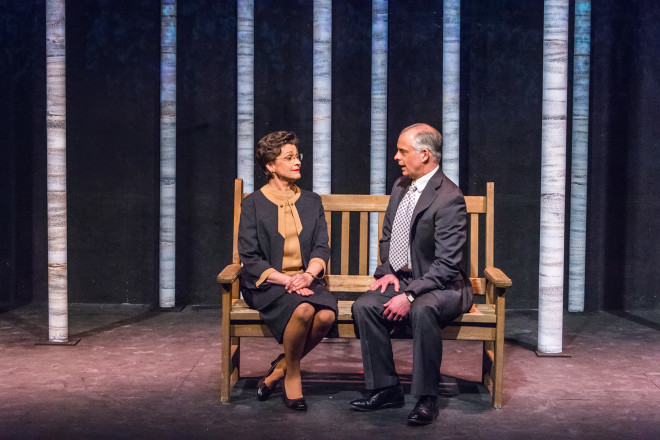 Carrie Hitchcock and Alan Kopischke star in ‘A Walk In the Woods,’ now on stage at Third Avenue Playhouse. Photo by Len Villano.

Arms negotiations and international politics form the foundation of Lee Blessing’s Cold War-era play A Walk In the Woods, but it is the power of human connection and humor that triumphs in Third Avenue Playhouse’s production, now playing through April 17.

The 1988 play, which has been nominated for both a Tony Award and Pulitzer Prize for drama, was inspired by the true tale of American and Soviet disarmament negotiators who left the official Geneva sessions in 1982 for a stroll in the woods and came up with a proposal on the reduction of medium-range nuclear missiles in Europe that was ultimately rejected by both governments.

While the plot is built on a year of tense negotiations during a volatile time between two superpowers, the real story plays out in the developing friendship of the young American diplomat and his older, more experienced Russian counterpart.

“Our first meeting is getting to know each other,” Hitchcock said. “And I would say the Russian is perhaps a little more cynical and the difference is of course the idealistic American, that we can really make a difference, make a change, be new to the talks; perhaps someone younger and newer, they have all that enthusiasm fighting against this cynicism and realism of the Russian negotiator.

“They both care very deeply about these issues and share their frustrations with their leaders,” she added. “And particularly with arms negotiations, whether they’re ever going to achieve real reductions or if the negotiations are just about the appearance of negotiations.”

Hitchcock described the play as a lesson in history and relationships that touches on friendship, trust, idealism, patience and frustration. While written nearly three decades ago, Hitchcock believes the production resonates today with its underlying mistrust of other cultures and countries, and the burning question of “whether we can work together to find agreements, if we can ever find rationality or if it is just going to be based on ignorance and gut feelings.”

Enhancing its relevance to today’s world is the slight variance in the lead role, played by Hitchcock. A Walk In the Woods was originally written for two males and Hitchcock explained that in the 80s, it was unlikely a woman would be involved in arms negotiations at such a high level. Still, Third Avenue Playhouse changed little more, if anything, than the pronouns used in the lines, Hitchcock said.

Set on the small stage at Third Avenue Playhouse, the focus on building of a relationship is enhanced with a park bench and faux forest, with lighting effects mimicking the changing leaves and walking the audience through a year’s worth of talks and a budding companionship.

“By the end of the show, they have truly formed a friendship,” Hitchcock said. “In the beginning, you meet someone and figure out what they like, what they don’t like, how far you can push them, what their strengths are, what their weaknesses are so it’s perhaps more of a challenge and definitely throughout the play, they recognize and respect each other even though they are very different. There’s quite a change in their communication.”

A Walk In the Woods is onstage at Third Avenue Playhouse through April 17. Performances are at 7:30pm on Thursdays, Fridays and Saturdays and at 2pm on Sundays. Tickets are $25 general admission and $10 student. For more information, visit ThirdAvenuePlayhouse.com.