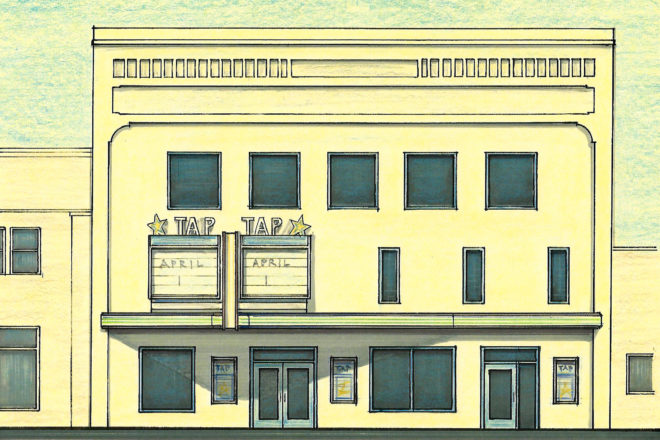 With half of the $3.5 million already raised, demolition has begun

Performing-arts centers are riding out the wave of the coronavirus pandemic with canceled shows, plays and musicals across the country. On 3rd Avenue in Sturgeon Bay, Third Avenue Playhouse (TAP), too, has gone quiet with the cancellation of its summer season. Inside, however, a major metamorphosis is underway to transform the physical space.

The Reimagine TAP capital campaign was announced publicly this week to raise $3.5 million to renovate the 3rd Avenue building from top to bottom.

“We see this as not only an investment in our organization – including our patrons, actors and donors – but as a commitment to the Sturgeon Bay and Door County communities that theater will return, and that TAP will remain and plans to emerge from the pandemic stronger than ever,” said Amy Frank, TAP managing director.

Demolition and the first phase of the construction has already begun courtesy of a $1 million lead gift and the support of numerous philanthropists who came in during the “quiet” phase of the campaign, which started last year. The donations bolstered the organization’s confidence to proceed publicly now.

“We’ve raised just over half of that, and it gave us the confidence to start moving ahead,” said James Valcq, co-artistic director. “It’s about two-thirds of our construction goal, and with the space unused, we wanted to take advantage of that so we don’t have to shut down later to do this.”

It’s not the first time that Valcq and Co-artistic Director Robert Boles have reimagined the existing spaces at the TAP building, which began as the Donna Theater movie cinema in the 1950s. Shortly after the two arrived in 2011, they converted an old storage room into the “black box” studio theater that seats 84. All of the company’s performances are staged in this intimate space.

“Wherever you’re seated, you’re close to the stage,” Boles said. “It creates an atmosphere of intimacy. You’re experiencing the play. It makes the audience more of an active participant.”

Though they’ve learned how to use that space for performances, its shortcomings became more apparent, Valcq said. Namely, it lacks the practical spaces required to stage a production. That means the larger former movie theater space that’s too formal and unwieldy for intimate productions is pressed into service as a space to build scenes, costume and rehearse, often during the same day. And because it’s designed for none of those things, it does none of them particularly well.

“So really the genesis was, how do we make that space practical?” Valcq said. “It’s too big for the theater we do, but what if the shape and feel could be altered to our advantage?”

The redesign is intended to meet the needs of both the players and the audience by raising the quality of the physical space so that it sets the same high standards as the performances. This will be done through creating a larger lobby space with accessible restrooms and an expanded concessions area; updating the backstage area, including adding proper dressing rooms; and creating a full scene shop.

The performance space, inspired by Greek amphitheater design, will have 130 seats and improved sight lines, lighting and sound projections. Most importantly, it will maintain the intimacy for which TAP has become known, Valcq said.

“Every theater in this county has something unique about the physical space, and ours is the intimacy of the small theater,” he said.

The construction will include a break through the common wall that separates the TAP building from the former Door County Advocate building, allowing for lobby expansion, consolidation of the box office and administrative offices, and access to the costume shop and costume storage.

“TAP’s presence in the Advocate building was one of the plans from the beginning,” said Alan Kopischke, TAP board president.

The construction has been separated into three phases, with the first having already begun. A target date for a “provisionally functional and usable” theater space, bathrooms and lobby is April 2021, Valcq said.

In addition to the $1 million donation – the name of that donor will be released at a later date – another benefactor has underwritten the addition of solar panels on the roof.

Boles and Valcq videoconference every two weeks with representatives from all of the professional theaters in Wisconsin, so they know their dark stage is the new normal for now.

“We’re all in the same boat,” Boles said. “That doesn’t make it easier, but it’s good to know we’re not alone.”

Still, the TAP crew said it considered itself fortunate to be able to make practical use of this time while also providing the community with a sense of optimism at a time where there’s not much optimism going around.

“We felt it would be a symbol of rebirth on 3rd Avenue,” Kopischke said. “We’re all worried about a lot of things right now, and people are really looking for some positive things.”

A “refurbished, shining jewel” on 3rd Avenue, Valcq said, would be that positive thing, injecting the community with a shot of optimism, just as the new owners of the former Younkers space did earlier this year when they announced their purchase and plans for the retail space.

“We’re the other shot in the arm,” Valcq said.