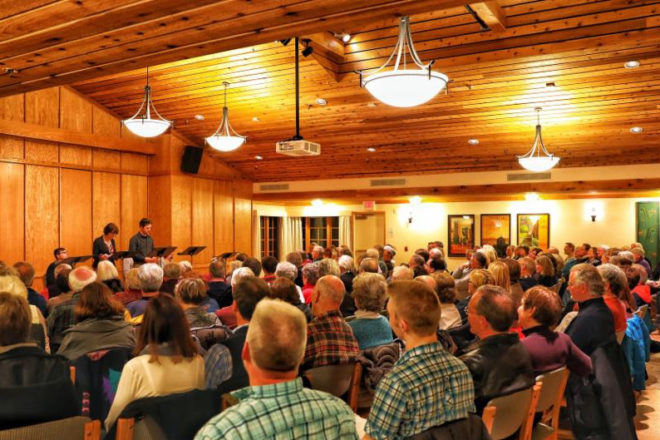 A Trick of the Light, a new comedy by Peter Moore, was read before a capacity crowd at Björklunden on Monday, March 5. The play reading is part of the 2018 Peninsula Players play reading series, The Play’s the Thing. Photo by Brian Kelsey.

The play reading set an attendance record for The Play’s the Thing. “It is very uplifting to see so many members of the community enjoying these performances,” said Brian Kelsey, Peninsula Players managing director. “Tonight’s audience of 159 is the largest we’ve hosted for a play reading and we were thrilled they enjoyed the reading.”

Minneapolis-based playwright Moore was unable to be at the performance, but Vinkler is communicating audience reactions with him as well as sharing feedback from the performers. Moore is still tweaking the play and this reading will help him fine-tune the comedy.

Season and group tickets are now on sale for the 2018 season. Learn more at peninsulaplayers.com.