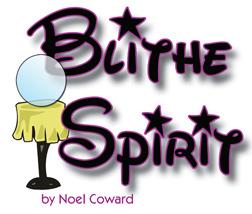 All you-know-what breaks loose when Charles Condomine invites Dr. and Mrs. Bradman over to witness a séance led by the local Spiritual Medium, Madame Arcati in the Third Avenue Playhouse production of Noel Coward’s Blithe Spirit. The hauntingly good play runs April 8 – 11 and 15 – 18. Thursday, Friday and Saturday performances begin at 7:30 pm. Sunday matinees are at 2 pm.

It all begins simply enough with an evening planned to provide Charles the background he needs for a novel he wants to write about the kind of phony conjuror he believes Madame Arcati to be. Condomine’s second wife, Ruth, is not all that comfortable with the idea though she does not know why until the ghost of his first wife Elvira appears to really rile things up.

Coward wrote the play to lighten up the darkness of the World War II, and it has become one of the great classic farces of the 20th century. The TAPWorks production is Director Henry Timm’s second foray into Coward’s comic mayhem.

Playgoers who arrive early for the performance can listen to vintage recordings of Noel Coward performing his songs at The Desert Inn in Las Vegas.

Tickets for Blithe Spirit are $15 for adults and $12 for seniors and students. Tickets are on sale at the theater box office, 239 N. Third Avenue, Sturgeon Bay, 920.743.1760. The box office is open Monday – Friday, 10 am – 3 pm, and one hour prior to performances. Tickets are also available at Dancing Bear, 13 N. Third Avenue, Java on Jefferson, corner of Fifth and Jefferson, and online at http://www.ThirdAvenuePlayhouse.com.