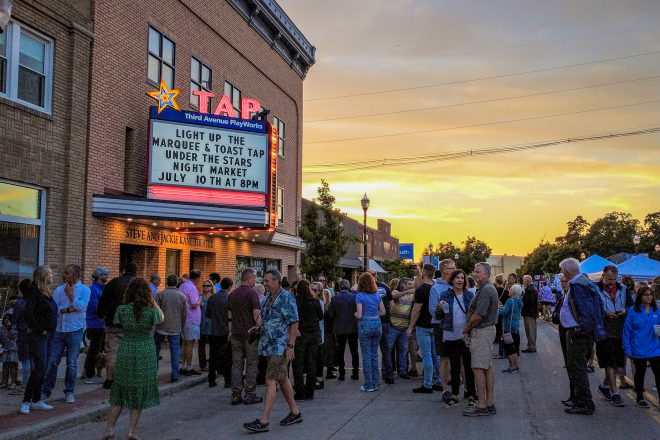 The neon marquee, complete with a star, lit up for the first time after restorations at Sturgeon Bay’s first Under the Stars night market of the summer. Photo by Rachel Lukas.

Third Avenue Playhouse (TAP) will be the last theater in the county to debut their 2021 season when they open Gutenberg! The Musical! on October 7, and for good reason. TAP’s theater has been undergoing a top-to-bottom-overhaul this summer and will look quite different when audiences take their seats in the fall.

The new theater will include a number of improvements for the company. The new stage offers a larger playing space than the black box had previously, which will allow TAP to produce larger musicals. But fans of TAP’s smaller, more intimate productions will be happy to know it retains much of the same feel as the previous stage, despite increasing the audience from 84 seats to 124. Behind that stage is a scene shop, a first for TAP, which will allow them to build larger sets. In September, that space will be utilized by Mitch Glancy, TAP’s newly hired technical director.

Even those familiar with the building on Third Ave. might be surprised to know there are three floors. TAP will use each one to their advantage, with an elevated technical booth on the second floor and rehearsal space on the third. Other improvements include a larger lobby with an art gallery, a dedicated concessions area, new box office and accessible public restrooms.

The rebuild has been extensive, and with the new space comes a new name. Eagle-eyed-passersby may have noticed the recently restored marquee is sporting the company’s new moniker, Third Avenue Playworks, which Managing Director Amy Frank said is more in line with the type of work the company is producing today.

“TAP is a living, breathing group of people who make theatre happen,” said James Valcq in a recent press release. “The term Works carries a WPA-ish [Works Progress Administration] connotation suggesting TAP is a theatre ‘by’ the people and ‘for’ the people.”

WPA imagery extends to TAP’s new logo, which features the outline of a person’s head with a theatre curtain on the left side, and a gear shape on the right, symbolizing theater as both art and work that engages company members and audiences alike.

Valcq, who served as co-artistic director of the theater along with Robert Boles since 2012, has stepped away from the theater to focus on his freelance career as a composer and performer. Boles will soon transition away from the company as well, though he will stay on until a replacement is found.

TAP’s first 2021 play, Gutenberg! The Musical!, will welcome audiences into the new space, and serve as a sort of “soft opening” before the 2022 season begins in earnest. The play, by Anthony Brown and Scott King, is a two-person musical spoof, in which a pair of playwrights perform a backers’ audition for their lavish musical about Johann Gutenberg, the inventor of the printing press. The two performers, Doug Mancheski and Chad Luberger, will take on over 30 roles with limited props and costumes, and sing through dozens of musical numbers accompanied by Ryan Cappleman, their on-stage and off-stage music director.

The small cast and limited technical elements of the play, which was originally produced in 2005, make it a perfect choice during a season in which all theaters have made COVID-19 concessions. Door County theatergoers have become accustomed to productions that are smaller in scope, but bursting with passion over the last few months, and should be delighted to see TAP’s work in-person again coming up in October.