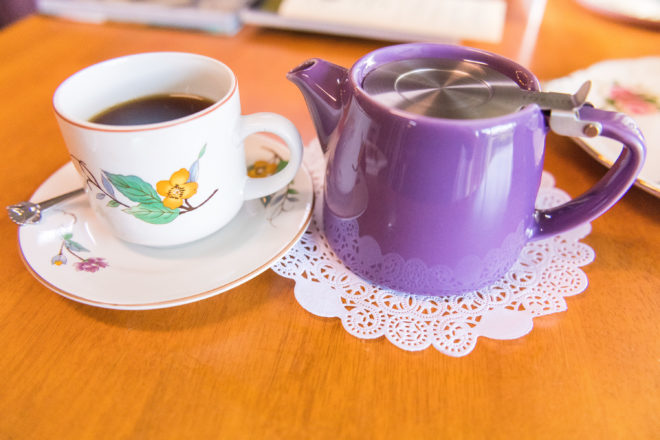 Afternoon tea is a special and often-enjoyed occasion in Karen McCarthy’s homeland of England, and McCarthy has now brought that afternoon tradition to Door County.

McCarthy and Lynn Church, co-owners of Tea Thyme in Door County, wanted Door County to have a tearoom for people to enjoy, and they got their wish after Tea Thyme opened up a British-style tearoom June 24. The 800-square-foot tearoom seats up to 32 people and is furnished with pictures, curtains, tables, napkins and tea sets that give the room its British style. 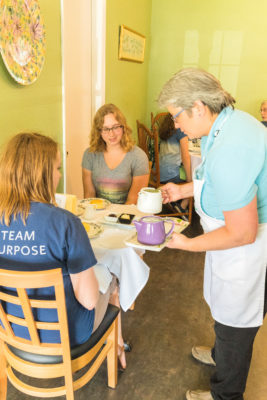 Tea is served alongside snacks. Photo by Len Villano.

The new tearoom is in a building connected to Tea Thyme in the Country Walk Shops in Sister Bay. After the tearoom’s building was put up for sale at the end of 2016, McCarthy and Church jumped at the opportunity to purchase the property and create a tearoom that makes visitors feel as if they really are in the country on the other side of the Atlantic.

The construction of the tearoom began in January and was completed in May by Pat McMurtry. In addition to the room’s furnishings, the serving of scones, shortbread and clotted cream to visitors along with tea help give the tearoom its British feel.

“You always picture tearooms as being pretty,” she said. “Each table is also named after a different British person, such as Jane Austen, William Shakespeare and Winston Churchill.”

The tearoom is open Tuesday through Saturday from 11 am to 4 pm and on Sunday from noon until 3 pm. A full afternoon tea is also held each Thursday and Friday from 2:30 to 4 pm with reservations required.

Afternoon tea, also referred to as high tea, is a common ritual in England, and Tea Thyme’s afternoon tea follows the British tradition by serving tea with a three-tiered tray of different foods. The tray features finger sandwiches, scones and sweets such as petit fours on top.

The addition of the tearoom to Tea Thyme has helped the store in terms of more customers and business, and it complements Tea Thyme’s role as a teashop, McCarthy said.

“People like to go to a tearoom for an afternoon tea, and we sell the tea next door. Often people expect those things together,” McCarthy said. “When they hear of one, they expect the other to be there as well.”

In the future, McCarthy and Church hope to host special presentations on products like essential oils as well as events and tea tastings in the new tearoom. In addition, Tea Thyme is hosting a High Tea Fundraiser in its new tearoom on July 15 from 4-6 pm that will benefit Big Brothers Big Sisters of Door County.

Tea Thyme in Door County is located at 10566 Country Walk Drive in Sister Bay. The regular shop is open Monday through Saturday from 10am – 5pm and on Sunday from 11am – 3pm. For more information visit teathymeindoorcounty.com or call 920.854.3737.