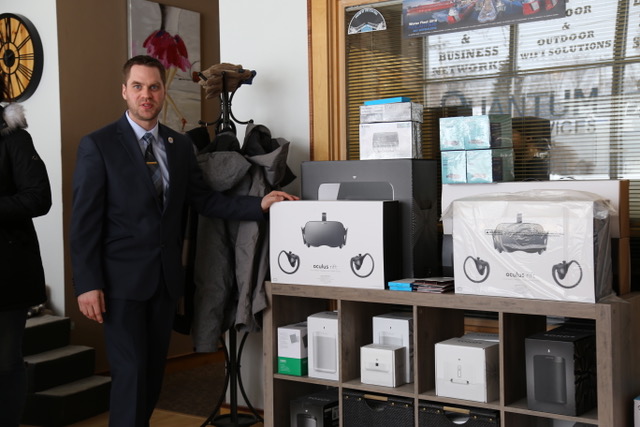 Nathan Drager has turned his one-man company, Quantum PC, into an IT force to be reckoned with. Photo by Tom Groenfeldt.

Three years ago, Quantum PC consisted of Nathan Drager running a personal-computing shop on Sturgeon Bay’s Kentucky Street from 7 am to 9 pm – single-handedly for the first month. Today it has a staff of 11, three fully equipped contractor vans with ladders strapped on top and a sister company called Quantum Cable.
The company will still fix your PC at its new site at Eighth Avenue and Egg Harbor Road, sell you a new notebook and move all your data to the new machine, cable a company or hotel for Wi-Fi, set up large security systems and act as the IT shop for local businesses. The company also custom-builds PCs and will let the buyer select the components and participate in the build.
Drager had something of a head start in setting up his business: For years he had been a go-to guy for maladjusted computers, on call to family, friends and eventually about 400 people who had asked him for help.
From the beginning, he had a vision of an expansive business that would provide comprehensive service for all things even vaguely computer related, so Quantum PC now provides Wi-Fi installations for hotels and school-security systems – in which school districts and the state are making large investments – from Door County to the Fox Valley. Equipping Gibraltar was a six-week project that included mobile-phone boosters so staff can use their phones inside the concrete construction. The company also works with Tractor Supply across Wisconsin, Walmart, and several companies in the Sturgeon Bay Industrial Park.
Quantum PC launched at an auspicious time – as individuals and businesses were outgrowing some first- and second-generation equipment. Hotels were fielding complaints from guests that their Wi-Fi coverage was spotty. When Leathem Smith asked what Drager could do, he realized he didn’t know how to run cable, so he called on his old friend Zack Hirn, who was working for a firm in Appleton. They ran cable on weekend Wi-Fi upgrades for hotels and corporations until there was enough business for Zack to come aboard full time last January to run Quantum PC’s sister company, Quantum Cable.
The extent of the business just in Door County is impressive. For instance, Quantum PC has 77 hotel clients, all running Lodgical Solution: reservations and operations software from the Sturgeon Bay-headquartered Bay Lakes Information Systems.
Quantum PC is a pioneer in service contracts for individuals and small companies, offering subscription services to cover repairs and the tuning of sluggish computers.
“Managed services were designed for large corporations,” Drager said. “Now we have a model for smaller businesses and individuals.”
Residential installations and services also keep the staff busy, consulting with homeowners and suggesting appropriate equipment, from security cameras to wireless mesh that can reach the far corners of even the largest home.
A gadget enthusiast, Drager tries just about every new bit of technology that comes into the business.
“We have used almost everything we sell,” said Drager’s fiancée, Erin Helgeson, who is also a skilled technician, a computer instructor at NWTC and the head of Quantum PC’s customer service.
“Door County is going through a technological revolution, but nobody knows it yet,” said Drager. “I think we have inspired a lot of this work.”