Digital technology has changed communication, medicine, entertainment and almost every aspect of modern life. Although the thought of farming often conjures pictures of one-tractor fields and rustic red barns, agriculture has also been profoundly changed by the digital shift. 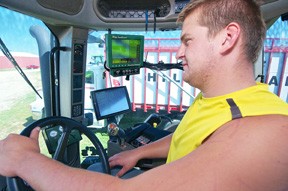 Robbie Schopf sits in a tractor with the latest in precision agriculture technology. Photo by Len Villano.

The days of planting acres of seed by hand and oxen pulling plow are over, replaced by machines that connect to satellites and practically run themselves.

“Everything is computerized,” said Dennis Schopf, owner of Schopf’s Hilltop Dairy near Carlsville.

Schopf has over 3,000 acres of farmland where he grows corn, hay, wheat, soybeans and other vegetables, and has almost 600 cows. He runs one of the biggest operations in Northern Door and has embraced digital technology. He’s got computers in his tractors and other machines that connect to cell towers and satellites, tracking information on seed variety, soil conditions and many other aspects of the field. He put in the systems last year, and said they’re about as sophisticated as they can get.

The technology, broadly called precision agriculture, can auto-steer the machines, determine how much fertilizer to spray depending on soil conditions, track where each seed is laid to avoid overlap, and more. Those precise measurements keep Schopf from using more seed and fertilizer than he has to, adding up to a big savings.

“It may not seem like a lot,” Schopf said, but “we considerably cut down on the bags of seeds we used this year.”

More bang, or bushels, for your buck.

Saving seed and cash is a good thing, especially considering the initial cost of precision agriculture technology. Schopf said putting computer systems in one tractor cost him about $29,000, which he admitted isn’t bad on tractors like his that cost $285,000. But adding that expensive equipment to a machine that costs only $30,000 is harder to swallow, and a reason the smaller farms haven’t jumped on board with the sophisticated systems. 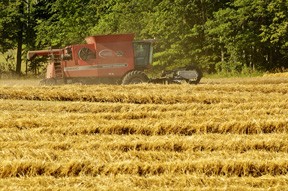 Schopf’s Hilltop Dairy in Carlsville invested in precision agriculture technology last year, helping them to track their production and plan for the future. Photo by Len Villano.

Jason Fischer, a professor at Fox Valley Technical College in Appleton, has a small farm in Manitowoc County. Although he teaches farmers about technology, he hasn’t implemented precision agriculture on his machines. Instead, he hires people with the equipment to harvest his fields, saving him the cost of buying the technology himself.

Merely implementing the technology isn’t enough, however, said Schopf – it takes some understanding to get the full benefit of the systems.

“You’ve got to know what you’re doing,” Schopf said. “Sometimes it can be frustrating.”

Schopf’s son Robbie is the real technology guru on the farm, and he has coached his dad in the ways of the new system. Robbie went to Fox Valley Technical College, where he learned about the cost savings technology could bring. Schopf said their second year with the system has gone undeniably smoother.

While their systems in the tractors are fairly new, the Schopfs have used a digital program called Dairy Comp since they bought the farm in 1995. The program tracks each cow’s milk output and other information. Cows have a chip in their ears and around their necks with a unique number that identifies them in the Dairy Comp system.

“We’ve probably got more accurate records on our cows than any human has got,” Schopf said. 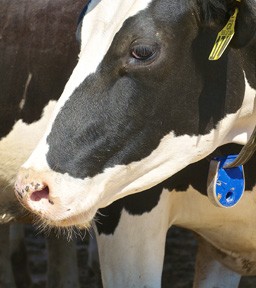 The chip hanging around this cow’s neck helps the Schopf’s track each individual cow’s output. Photo by Len Villano.

Although precision agriculture and Dairy Comp haven’t made farming easier for Schopf and his family, he said it has upped productivity.

“Technology is fine-tuning everything to get more,” Schopf said.

But they’ll have to keep up with the ever-changing technology. New programs are created every year, adding more possibilities for savings, and Schopf recently attended the 2012 Farm Technology Days where he saw a tractor that runs without a driver. He guesses it will be on the market in 2014, but doesn’t think he’ll add it to his fleet of machines.

Fischer agrees that farming technology will get more sophisticated.

“We’re just at the tip of the iceberg of what’s to come in the precision agriculture area,” Fischer said. 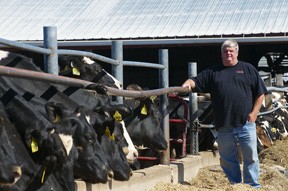 Dennis Schopf, owner of Schopf’s Hilltop Dairy, has been using technology like Dairy Comp, which tracks his cows’ milk production, since he purchased the farm in 1995.

Age is a factor in adopting new systems. Fischer said it’s more important for young farmers to understand precision agriculture, while older ones could get away without it.

“If you’re 25 or 30 years old, you’re going to need to know it,” Fischer said. “If you’re 55 or 60 years old you probably aren’t. An older farmer may not see [the benefits], but younger farmers will have to embrace it because it’s going to be mainstream throughout their careers.”

Like most modern technology, Fischer said it’s easier for younger people to grasp how to use it effectively.

Not all technology on the farm is mounted on a tractor or clipped to a cow’s ear. Experts like Dean Volenberg from the University of Wisconsin Extension in Door County use technology like iPads to diagnose problems on site.

The extension’s integrated pest management team helps farmers decide when and how to deal with a pest problem. Instead of taking notes in the field, heading back to the office to look up information on a computer and then advising a farmer, Volenberg can do it all on the spot.

“We use [iPads] to bring that information directly to the farmer,” Volenberg said.